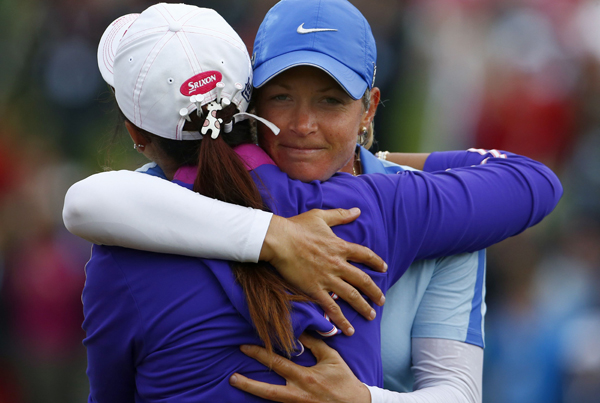 EVIAN-LES-BAINS, France - Suzann Pettersen barely had time to hug her caddie before the champagne started flowing.

In the first women’s major played in continental Europe, it was one of the continent’s biggest stars who won.

Pettersen beat teenage star Lydia Ko of New Zealand by two shots to win the Evian Championship on Sunday and clinch the second major title of her career.

With two putts to win it, the Norwegian calmly rolled in her par attempt to clinch the title. She then held her head in her hands, hugged her caddie and laughed as she was surrounded by friends spraying her with champagne on the green.

“I might start to get a bit emotional,” Pettersen said, her voice wavering, as she collected the trophy.

It was her first major since the LPGA Championship in 2007, and her second straight tournament win after the Safeway Classic this month. This was the first year that Evian counted as the fifth and final major of the year.

Pettersen posted a 3-under 68 to finish with a 10-under total of 203 after the tournament was reduced to three rounds when Thursday’s play was washed out. The 16-year-old Ko was trying to become the youngest ever major champion, but settled for a 70.

“She’s such a great competitor. She keeps us on our toes,” the 32-year-old Pettersen said. “She’s 16 and she’s good enough to win tournaments, to win major championships. She’s a future star for this game.”

Top-ranked Park In-bee was looking to become the first golfer to win four majors in a year, but finished way out of contention.

Mika Miyazato of Japan held a one-shot lead going into the final round but collapsed completely with a 79 that left her in a tie for 19th.

That left Ko - at 16 years, 4 months, 22 days - as Pettersen’s main challenger, but the New Zealander bogeyed the 13th to fall two shots behind and never looked likely to make a comeback. Her chip for birdie at the 18th - which would have put some pressure on Pettersen - stopped just left of the hole.

She’ll now have to wait until next year for a chance to break American Morgan Pressel’s record of youngest major winner. Pressel was 18 years, 10 months, 9 days when she won the Kraft Nabisco Championship in 2007.

“I don’t think I felt that nervous today, but coming down the last two holes I thought Suzann had it in the bag,” Ko said. “It was really good to know that I could come close to a winner at a major. Hopefully next year it will be a 72-hole event.”

American Lexi Thompson posted a 68 to finish four shots back in third place, with Koreans Ryu So-yeon and Pak Se-ri five shots behind in a tie for fourth. AP