Space for waste is running out

Space for waste is running out 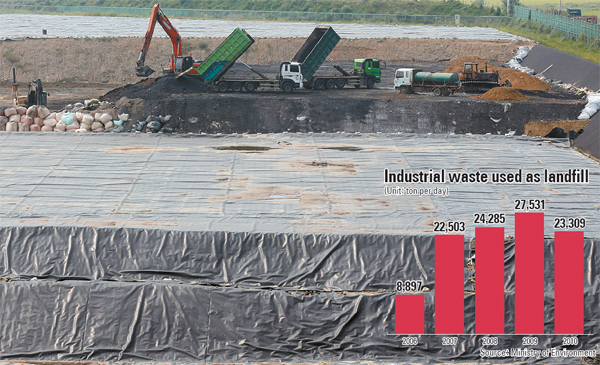 Heavy equipment is used to bury industrial waste at a landfill in Hwaseong, Gyeonggi. The shrinking capacity of landfills to take industrial waste is becoming a problem for Korea as the quantity of waste increases every year. Communities reject new landfills in their neighborhoods. By Kim Seong-ryong

Unlike the typical dump, the solid waste industrial landfill in Jecheon, North Chungcheong, is not a mountain of undifferentiated garbage. It almost looks like a campground in which something has gone awry and the tents have all collapsed.

The tent-like structures are landfill liners built in 2006 to pull dust and methane out of the waste in the landfill and disperse it. Heavy snows last winter led to a collapse of the structure and a halt to landfill operations for nine months.

“Because of the high cost of repairing the facility, we are considering halting the operation for good,” said Lim Chae-geon, director of the environment management division of the Wonju Regional Environmental Office.

With the Jecheon landfill out of commission, it’s becoming more difficult to find a resting place for industrial waste produced in North Chungcheong, which is home to a total of 62 industrial complexes taking up 37,436 square meters, according to Chungbuk Research Institute of Korea. The kind of operational problems experienced in Jecheon have been suffered at other landfills too.

Another industrial waste site in Gunsan, North Jeolla was hit by heavy rains last summer. The landfill was flooded by 880,000 cubic meters of rain.

By the end of August, government officials managed to extract 713,000 cubic meters of the water but more work needs to be done.

“After the halt of operations, Gunsan region’s industrial wastes are being sent to Yeosu, South Jeolla,” said Yoo Young-ran, an official at the Jeonju Regional Environmental Office. “We need to assess how safe the Gunsan facility is and have to finish the restoration work.”

Experts are predicting a crisis when Korea runs out of places to dump its industrial waste.

The remaining capacity at 32 commercial wastes landfills nationwide is estimated to be 13.8 million tons. Given that the annual amount of industrial waste that needed to be disposed of in landfills was 3.6 million tons in 2011, it is only three to four years before the landfills are full.

And the amount of industrial waste produced per day in Korea is on the rise. In 2011, the figure was 147,982 tons per day, which includes waste that must be disposed of in landfills and other waste that can be disposed of in different ways, compared to 132,664 tons in 2009.

Starting new landfill areas is ever more difficult due to complaints by local residents. Controversies over unwanted landfill projects sometimes spiral into tension between regions.

The conflict between Seoul and Incheon is one example.

The Seoul Metropolitan Government is insisting that a landfill in Incheon must continue to take waste from Seoul, Gyeonggi and Incheon through 2044 - or another three decades. Incheon’s city government said locals have had enough of the facility and want it to stop taking garbage three years from now.

Compounding matters is an upcoming regulation that will ban certain kinds of waste, especially sludge from sewage treatment, from being dumped into the sea from 2016. Some 800,000 tons of that kind of waste per year will have to be disposed of on land.

“The total ban will go into effect in 2016, but we initially planned to stop dumping that kind of waste at sea starting from next year,” said a source at the marine conservation division of the Ministry of Oceans and Fisheries.

“Now we have no choice but to continue the disposal at sea because the capacity of landfills has run out,” the source said.