For this gayageum master, making music was destiny

For this gayageum master, making music was destiny 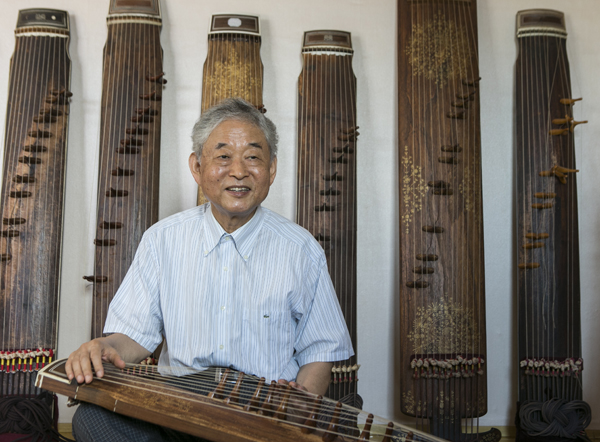 It’s hard to imagine, but a gayageum (12-string zither) performance by Hwang Byung-ki can even make even the hippest young person want to get up and dance. With 60 years of experience playing the traditional instrument, Hwang, a 77-year-old gayageum master, has dedicated his life to tearing down cultural barriers and fusing gugak (Korean traditional music) with Western contemporary and modern music, in such genres as pop, jazz and dance.

In a recent interview with the JoongAng Sunday, Hwang, a professor emeritus at Ewha Womans University, said that although Koreans have outstanding genes for creativity, inherited from an ancient horse-riding people, their society lacks imagination today.

“The reason behind that is because the country has a bad education system,” Hwang said. “The system should be reformed in a direction that nurtures students’ talents.”

Q. Why do you perform?

A. Because I like the performing arts. In 1999, I was diagnosed with colorectal cancer and I had major surgery. Before the operation began, I was asked to sign a liability waiver [for the hospital or doctor] in case I passed away in the middle of the operation. It was the most painful and miserable time I’ve ever gone through. I was lying down [before the operation] and far away I noticed a clock. That moment, the feeling and the thoughts inside me was that I was so willing to compose the most beautiful music piece right then, at the most miserable time in my life. That showed my life was destined to be in the arts.

Were your parents also artists?

No, not at all. In fact, my father hated the arts. He didn’t like any kind of “sound.” For example, when he arrived home, he even turned off the radio, if it was on. What’s more, I never saw him whistle once. All his life, he went to the movie theater only three times, and all three times he left before the movie ended. He usually enjoyed Chinese novels written in Chinese characters. That’s all.

What is more important for an artist, to be born with natural talent or practice?

I would have to think about that. I went to Jaedong Elementary School in Jongno District in Seoul. At the time I was enrolled, the school offered intensive classes in art, music and physical education. I loved the sound of the harmonium and I enjoyed attending music classes. That said, I also received good grades in music. But putting that aside, when I was young, I was often called a troublemaker.

When did you first learn the gayageum?

It was when I was in eighth grade when my family and I had to escape to Busan during the Korean War. I think that’s when my life as a musician started. At school, my classroom president asked me if I wanted to learn gayageum with him and we visited an arts center where I met an older man who enjoyed playing the gayageum, by the name of Kim Chul-ok. That’s when it all started. It was a beautiful sound that I still cannot forget it. When I heard the sound, it was as if my soul was drawn to it, so I’ve been studying the gayageum ever since. I practiced the instrument every single day at the National Gugak Center before it moved to where it is now in Seoul. It seems in life, when you do what you like, there is always a path.

Were your parents okay with you learning the gayageum?

They were opposed to it. But I persuaded them by telling them that “even [Albert] Einstein played the violin. If you allow me to learn the gayageum, then I will study really hard.” That’s how much I loved the instrument. When I studied at Kyunggi High School and law at Seoul National University, and even after graduation and when I started my own business until I became a professor, over a period of 60 years, I never skipped a day of playing the gayageum.

You seem to put much importance on effort.

In music, the actual act of performing is the most important thing. Performing an instrument means moving your body, and a physical body is very honest. It is possible for the mind to fool itself and others, but it’s impossible to fool the body. This is why practice is very important. I was told that figure skater Kim Yu-na practiced six days a week for six hours every day. I would bet that even Kim, the figure-skating queen, if she does not practice for several months, then she too would fall on ice. It’s the same for the gayageum. When you skip practice, then you get blisters on your fingers and the muscles are no longer tense and you are not able to perform anymore. In order to be a master of something, it means continual practice.

In order to become a master, what else is needed other than natural talent and continual effort?

The environment is very important. Prodigies in fact are born and nurtured by society. If Beethoven was born in Jeju during the Joseon Dynasty [1392-1897], then he wouldn’t have been able to compose the Moonlight Sonata or the Symphony No. 5. Why? Because there were no pianos there at that time. The reason why Beethoven became a prominent musician is because of the society and culture he was a part of.

Why is it that many people say Koreans lack creativity?

When it comes to music, Korea wins all the competitions for recitals and performance that emphasize musical techniques. But when it comes to composing music, Koreans are far behind. I believe there is a lack of creativity in all parts of the Korean society, not just music. Koreans are strong at imitating things that have already been produced, but they are weak in terms of having a creative mind that leads to a new era. The reason behind that is because of a bad education system. The United States, for example, offers a good education system that boosts creativity. The country allows students to discover what they like to do and allows them to be trained so that they become good at it. Korea should also be like that. The government created the Ministry of Science, ICT, and Future Planning and I believe the ministry should be run by creative people. We are related to the horse-riding people [from central and northern Asia] and we have strong genes when it comes to creativity. Education is the problem. There should be a change.

What would you like to expect from President Park Geun-hye?

She will try to make things better, but nothing can be done alone. This means that she will have to cope well with other people. She will have to look for good people to work with her, regardless of political faction. When former President Lee Myung-bak was elected, I asked him to visit the National Theater of Korea at least once during his five-year tenure, even though I knew he most likely would not be able to keep the favor. I was right. During his five years in the presidency, he wasn’t able to visit the theater once. The power of culture is becoming more and more important and I hope [President Park] gives more attention to it.