2AM members to reunite onstage

2AM members to reunite onstage 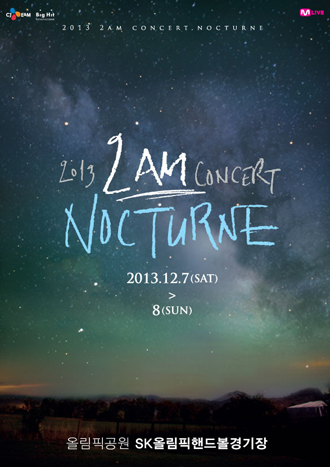 Members of boy group 2AM will reunite as one after focusing on individual acts to perform together in December.

The group will perform for two days starting Dec. 7 at Seoul Olympic Park in Songpa, southern Seoul, in a show titled “2013 2AM Concert Nocturne.”

“From some emotional stages that will feature music-drama that consists of both music and some stories, other striking individual performances from each member will be shown onstage,” said CJ E&M, a concert organizer. “Just like the melodramatic piano piece ‘Nocturne’ features emotions felt on a quite night, fans won’t get bored as the four members show off their four different characters in a variety of music performances onstage.”

Tickets were released yesterday at 8 p.m. on Interpark, a local online shopping retailer.