How scary are Korea’s off-track gamblers?

How scary are Korea’s off-track gamblers? 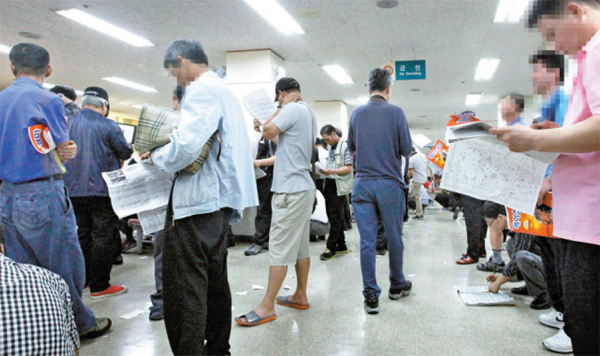 Punters at the off-track betting center in Yongsan consult guides to the day’s races on Sept. 15. The Korea Racing Authority’s plan to move the center is causing heartburn among residents of Yongsan in central Seoul. By Park Sang-moon

For most office workers and students, Sunday evening is a time of dread, with a weekend of freedom coming to a close and a new workweek just hours away. But at an off-track betting center in Seoul’s Yongsan District, the setting sun on Sunday is a time of hope: A chance to make up for one’s losses, or at least lick the wounds of a failed weekend of bets.

The 7:30 p.m. race beamed in from Seoul Race Park in Gwacheon, Gyeonggi, is the final show. Anxious punters fix their gazes on the screens showing the horses leaving the starting gates. They get more aggressive as the race progresses, and anyone who blocks the view of the screens is likely to be addressed with an obscenity. The men are mostly in their 40s and 50s. When the race ends, many tear their betting slips to shreds and drop them on the floor. A whiff of smoke from a nearby smoking room fills the air. The men plod out of the center.

The betting center abutting Yongsan station is also seeing its own sun set. This month, it was scheduled to move 83 meters (272 feet) away to a new 18-story building.

But that small move has created a very large furor as local residents say it will bring the punters and their nasty habits closer to local schools and their students. In fact, in its new location, the betting center will be closer to six schools than it was before. 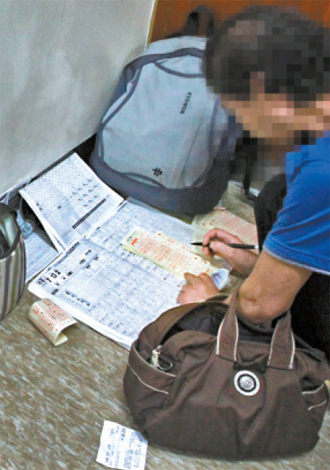 A gambler fills in a ticket at the off-track betting center in Yongsan, which is supposed to move to a new facility nearby. By Park Sang-moon

Residents formed an emergency response committee and staged a protest rally at night in which they carried lit candles.

“The presence of the betting center will be a blight on an environment in which children attend schools,” the committee said.

If you spend time at the current center, you can see what the residents don’t want near their schools and kids. It’s in a building with a dissipated 1980s aura. At capacity, the center can squeeze in some 2,700 people. But, there are not enough seats and men stand or squat by walls or pillars. There are a dozen betting windows along one side, two smoking rooms, an information desk and a small snack corner. The pattern is repeated on five floors of the building.

In the smoking rooms, the punters exhale their frustrations. They curse and cough incessantly. Despite constant sweeping up, the floors are always covered with a blanket of shredded betting slips, like drifts of snow.

When the races are over, the punters pour out of the building in a mass, most of them lighting cigarettes as soon as they can. A layer of cigarette ash permanently covers the surface of the street.

The more fortunate ones head for pubs in groups to let off some steam.

The least fortunate go straight to convenience stores to buy beer or soju. Betting sheets and booklets with information about each day’s races can be spotted discarded on the street.

The move to the new site is legally sound. The School Health Act requires businesses of such a nature to remain outside a 200-meter perimeter of schools - a school safety zone - and the new building complies.

But opponents argue that 200 meters is not far enough. The strongest complaints are coming from the Sungshim Girls High School, alma mater of President Park Geun-hye, where the local residents’ committee held a press conference last month. “Off-track betting centers promote the undesirable idea of earning big prize money through gambling,” said a representative of the committee.

Opponents also argue that the move will prompt a host of adult entertainment businesses to move into the area. And in any case, exposing students to the gamblers themselves is bad enough. They’re addicted to a disreputable hobby, many are probably criminals or have criminal pasts, and sex crimes are bound to go up in the area too.

In Korea, the stereotypes about horse race punters are pretty negative, and they’re basically seen as persona non grata, especially around children.

Stats show that the stereotypes aren’t without some basis in fact. According to a 2009 study released by Korea University, out of 23 types of gambling activities, horse racing is the third most addictive with a 19.9 percent addiction rate. (Casinos and other adult games come in first with 33.4 percent, and cycling is second with 20.4 percent. Internet gambling comes after horse racing with 19.5 percent.)

The Korea Racing Authority, the state-run regulator that runs the center, is the chief defender of the move. Spokesman Park Jong-bae disputes the charge that sex crimes increase around betting centers.

“This is a groundless claim that slanders the KRA’s customers,” he says. As to complaints from local schools, he points out that the Yongsan center only opens on Fridays and weekends, and during the rest of the week it will function as a community cultural center that hosts low-priced guitar, singing and English lessons. “The new betting is on a site that does not overlap with routes that students of nearby schools take,” he says.

The new building is as clean and modern as the old one is dingy. The ground floor will have a cafe run by disabled personnel trained to be baristas by the KRA.

The limit to the number of gamblers who can come in will be kept unchanged at 2,718.

Alistair Middleton, a British expat who runs a blog about horse racing in Korea, said in an e-mail that illegal casinos are far worse than legal betting on horse racing. “But there’s no getting away from the fact that while the majority are able to enjoy having a bet and walk away,” he writes, “there are some who become addicts and have their lives ruined.”

Middleton said he still considers horse racing a sport, which many in Korea might disagree with “because unlike other sports, racing depends on betting for its existence.” In the UK, “racing doesn’t have the same kind of social stigma attached to it because you can legally gamble on pretty much anything ... in fact in many ways, it is seen as an upper-class pursuit. The Queen and Sir Alex Ferguson are probably the best known racing fans back home.”

“Horse racing is also popular in places like Hong Kong and America,” said Uhm Dong-hoon, an urban administration professor at the University of Seoul. “But the opening of an off-track betting center would not elicit such strong opposition in those places because the perception is not as negative as in Korea.”