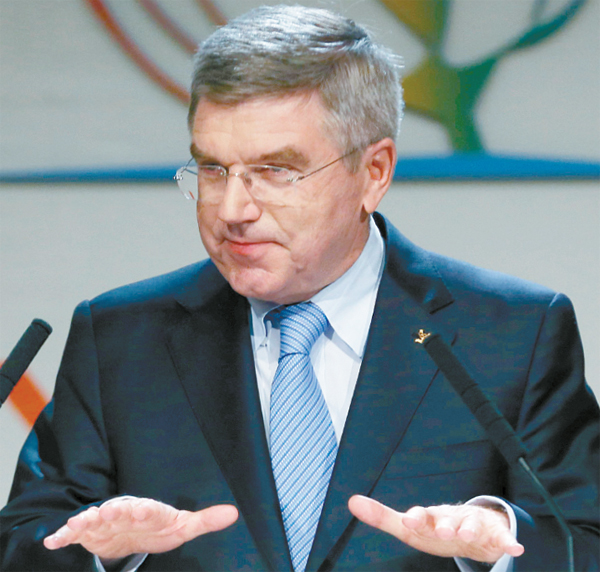 In the Olympic’s home of Lausanne, Switzerland, at the beautiful Chateau de Vidy, Thomas Bach started his new position as the ninth president of the International Olympic Committee after he was elected on Sept. 10. A gold-medal fencer from the 1976 Olympics, Bach had been elected a week earlier in Buenos Aires, at the 125th IOC Session. Bach will lead the IOC for the next eight years, with a possible re-election for an additional four years.

During his expected reign through 2025, Bach’s desk on the castle’s second floor will be covered with stacks of files that will determine the destinies of the countries and organizations in the Olympic family looking to team up with the apex of global sport, be they host cities or broadcasters.

A longtime power broker in the Olympic family, Bach had long dreamt of sitting before the majestic five-ring Olympic flag at the chateau. A successful lawyer and businessman, Bach built a reputation for being a stellar “second-in-command” as the vice president of the Executive Board, the core organ of the IOC. Since he first began working for the IOC in 1991, he has built a long resume, with stints as chief of the IOC’s most important commissions, including the legal and candidate-city evaluation commissions.

Being IOC President is a tough job. Globe-trotting is a constant part of life and you can’t complain about ceaseless meetings in the wee hours. Bach is no stranger to this life, and he has his hands full already. On Sept. 29, he made the first official trip of his presidency, traveling to Olympia, the birthplace of the Games in Greece, for a torch-lighting ceremony for the Sochi 2014 Games. Time is ticking fast until February’s Games in Russia, which will be the first under Bach’s reign, thus a big test for his leadership abilities in action. So it is no surprise that Russian President Vladimir Putin gave Bach a phone call to wish him well upon winning the IOC election.

On Sept. 17, Bach was all smiles as he opened his presidency “with a hearty chuckle,” as an IOC staffer put it. Bach spent the day with his predecessor, the now Honorary President Jacques Rogge. Bach, known for his humorous style, made the occasion spirited, as he made a reproachful gesture from Rogge, adding he received “a lot of advice - or instructions.”

But President Bach’s jokes have edges. They have meanings and intentions. Bach was making it clear that he would be as demanding as his predecessor, although they may differ in style. Honorary President Rogge was well-known for his poker-faced, all-serious with a hardworking personality. He did not shed a single tear in his emotional farewell ceremony, which included a surprise video message from his staff and a 20-minute standing ovation.

Fluent in French, English and Spanish, Bach told the IOC administration that there will be “not a different direction” from the past presidency. Instead, he emphasizes gradual change, saying the IOC needs “not a revolution but an evolution.”

The question is, what kind of evolution? Bach is a man who knows what he wants, and he left some hints in his campaign manifesto and in media interviews while on the campaign trail. A wind of change, for example, is expected in the Games’ host city selection process. Upon his election in Buenos Aires, Bach told Inside the Games, a Web site specializing in the Olympics, that the IOC is “asking too much too early” in the bidding process.

“We approach potential candidate cities like you would in business with a tender for a franchise,” he said. “This leads to a situation that all the bid books are written by the same people around the world.” He drew a clear line in the sand that he wants to “change this mentality” and attract more cities for candidature.

Korea’s second-biggest city Busan, which has long eyed an opportunity to bid for the Summer Games, perked up at the news. “After PyeongChang 2018 and Tokyo 2020,” said a municipal official who requested anonymity, “we are aiming for the 2028 Games and will follow the new directions of the new [IOC] president.” The official did not rule out the possibility that Busan could also consider a bid for the 2032 Games.

Another part of the Games that may face “evolution” appears to be the number of sports in the Olympics, which is now capped at 28.

Changes are also expected within the IOC on decision-making processes, as Bach pledged to make them more democratic by introducing a “brainstorming” system among IOC members, whose maximum number is 115.

Elected with 49 votes in the final round, Bach also needs to ensure the IOC is unified in its direction. The unreserved, outspoken support for Bach from the influential Sheik Ahmad Al-Fahad Al-Sabah, the Kuwaiti member and head of the Association of National Olympic Committees, has raised the eyebrows of some members. But Bach is well aware and emphasized that he was not interested in creating factions. “I want to be a president for all,” he said. “My door is open.”

It’s a stance he echoed in his election pledge: “Let us, this great universal orchestra of IOC members, play together in harmony towards a bright future for the Olympic movement under the leadership of the IOC.” Now Bach’s job is to shoulder the duty of conductor of the orchestra.

Bach, meanwhile, harbors good relations with Korean sports leaders, including IOC member Lee Kun-hee, the Samsung chairman, who exchanged friendly handshakes and smiles with Bach in the Buenos Aires session. Chairman Lee’s son in law, Kim Jae-yeol, the vice president of the Korean Olympic Committee (KOC), was seen exchanging close words with Bach at the session’s closing reception, held at a yacht club. Also present at the yacht club were the KOC Honorary President Park Yong-sung and the incumbent President Kim Jung-haeng, who all said they have solid faith in Bach’s leadership.

Korea means many things for Bach. In May, at the SportAccord convention in St. Petersburg, Bach told this reporter that he still values his experience as a special envoy to Pyongyang for the joint march of the two Koreas in the 2000 Sydney Summer Games’ opening ceremony. “It was one of the most memorable things for me as an IOC member,” he said.

Some memories, meanwhile, are less sweet, such as when Munich’s bid for the 2018 Winter Games that he led lost in 2011 to Korea’s Pyeongchang (stylized as “PyeongChang” for the Olympics). As a man of self-control, though, Bach was a most gracious loser, congratulating the winner. Cho Yang-ho, who then led the PyeongChang bid, said, “I look forward to seeing Mr. Bach as a maestro of harmonious IOC orchestra.”

Kim Jin-sun, the head of the PyeongChang’s organizing committee, echoed the sentiment. “Mr. Bach has not spared any valuable advice for PyeongChang since we won the Games,” said Kim. “And I have high expectations as we continue to work with him.”