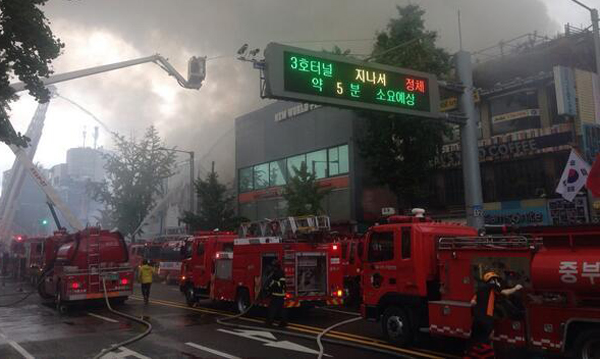 Many fire trucks and firefighters were dispatched to put out a fire that engulfed eight buildings and 15 shops in Itaewon, central Seoul, yesterday.[NEWS1]

A fire broke out in Itaewon, central Seoul, early yesterday morning, engulfing eight buildings and generating 250 million won ($232,250) in losses. No casualties were reported as of press time.

The Yongsan Fire Station said that it was not immediately clear what caused the blaze, which damaged 15 shops and restaurants and produced thick clouds of black smoke.

“It seems no one was in the buildings when the fire broke out,” said a representative of the Yongsan Fire Station. “The cause of the fire remains under investigation, and we are investigating based on accounts of witnesses.”

The fire erupted at a three-story building around 7:30 a.m. and spread to seven adjacent buildings. The fire site was approximately 70 meters (230 feet) west of Itaewon Station’s exit No. 1, behind the main Itaewon street. 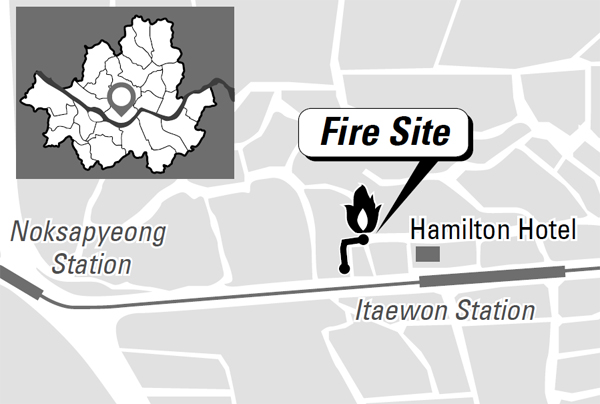 Traffic on the main street was blocked off between the Hamilton Hotel Seoul and Noksapyeong Station for four hours after the fire department dispatched 44 fire trucks and more than 140 firemen.

It took 70 minutes to put the fire under control.

The fire station explained that the fire produced thick smoke and was hard to control because some of the shops sold clothes and had a lot of Styrofoam materials.