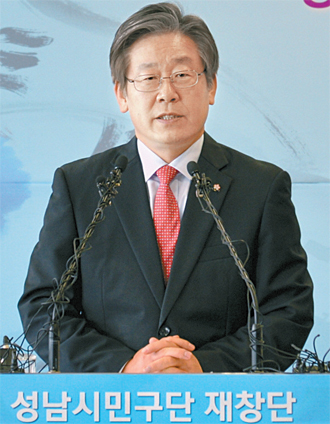 SEONGNAM - The citizens of Seongnam will become the new owners of Seongnam Ilhwa Chunma FC as their municipal government yesterday announced that it will take over the southern Gyeonggi-based team that was in danger of being dissolved due to the financial troubles of its mother operator, the Unification Church.

“We have been considering many ways to host a professional football team for years that include plans of establishing a new club by cooperating with a conglomerate and taking over the Chunma football club,” Seongnam Mayor Lee Jae-myung said yesterday at a press conference announcing the decision. “But since we need to spend a large sum of funds to operate a professional ball club, we have been carefully checking the issue and eventually decided to run the club because our citizens were very supportive on this issue.”

After Lee announced the decision, dozens of Seongnam citizens in the audience applauded, welcoming the club that will become the second team owned by citizens following Daejeon Citizen FC in 1996.

Chunma FC has had a hard time financing its operation since the Unification Church decided not to monetarily support the club after its founder, the Rev. Moon Sun-myung, died in September 2012.

The church shut down all of its sports businesses, including the South Chungcheong Women’s Football Club and the Sunmoon Peace Football Foundation, organizer of the Peace Cup Korea, an invitational preseason friendly football tournament for club teams that was held every two years.

The Peace Cup Korea was held in many countries, including Korea and Spain. Many football clubs, including PSV Eindhoven from the Netherlands and Tottenham Hotspur from England, participated in the event.

The church then told the club to find ways to survive in the K-League on its own.

Under those circumstances, the club suggested that the municipal government take over the team soon after the mayor announced a plan to establish a new football club in March. The city government studied the feasibility of running a football club while financing it with taxpayers’ money.

The study found it is possible to run the club without a deficit, but the city government hesitated to do so as about an average of 10 billion won to 20 billion won ($9.3 million to $18.6 million) was projected to be spent every year for running Chunma.

At that time, Chunma found a new partner. Ansan city government in Gyeonggi, who said that it was also preparing to establish a Daejeon Citizen-style club, negotiated with Chunma and agreed to take it over in late August. But Ansan had the same fears as Seongnam city government. Ansan told Chunma that it would take over the club after finding a sponsor who could pay 2 billion won to 3 billion won every year. “Warrior Sports,” a global sports brand based in the United States became a nominee, but Ansan and the sponsor couldn’t reach an agreement in September.

Seongnam city government was watching the negotiation between Ansan and Chunma soon after it made its second attempt, this time with supportive Chunma fans who didn’t want their home team leaving the city.

Hundreds of fans visited Seongnam city council and the municipal government to urge them to keep their home team in the town.

The city government eventually decided to remain the host city for Chunma, though they still have some problems to solve.

“We are going to provide plans for selling the club’s shares to the citizens while finding a sponsor that can give a large sum of financial support every year,” Mayor Lee said. “Since we don’t want any workers and staff of the team losing their jobs, we also need to find a solution for appropriate employment succession.”