Korean diaspora has to take schooling with it

Korean diaspora has to take schooling with it 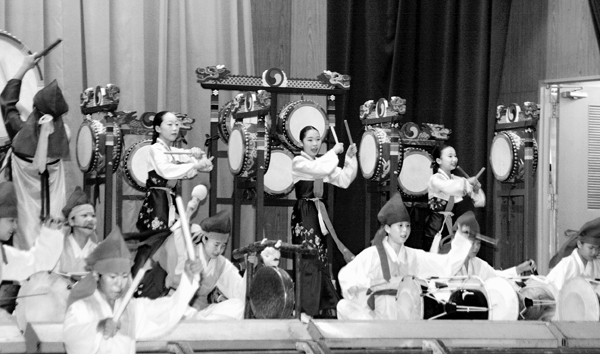 Students at a Korean school in Osaka on Sept. 14 celebrate a literature festival and display other examples of Korean culture such as food, music and dance. Provided by the Overseas Korea Foundation

This year marks the 150th anniversary of the first group of Koreans who migrated to Russia in 1863, the start of a diaspora that now includes Koreans who are spread across the globe in 175 countries, perhaps the widest of any ethnic group in history.

And where Koreans go, the Korean language and other cultural practices follow.

On American Samoa, a speck of land in the South Pacific east of Australia, the 300 ethnic Korean residents have a Korean language school in Pago Pago, the capital.

“Just because Samoa is small doesn’t mean you can overlook Korean language education there,” said Suh Young-gil, a former consul general in Hawaii, which has jurisdiction over American Samoa, the southernmost territory of the United States.

Young Koreans from Samoa get into Ivy League schools and other top U.S. universities, including the military academy at West Point, he says, and they speak both English and Korean fluently.

Suh said this is due to “the joint efforts of students, parents and teachers giving their all to hangul studies.”

Hangul, the 24-letter Korean alphabet described as the most logical writing system in the world, was created in 1443 by King Sejong during the Joseon Dynasty (1392-1910).

The same kind of Korean language schools and Korean history studies can be found closer to home in countries such as Kazakhstan, China and Japan, where sizeable Korean communities reside.

At Almaty State University in southern Kazakhstan, a 67-year-old history professor, Georgii Kang, has Eastern European features and blue eyes. He is a third-generation Korean in Kazakhstan. His father is ethnic Korean and his mother is Russian.

“In the past, there was no mention of Koreans in Kazakhstan history textbooks,” Kang told the JoongAng Ilbo. “As Korean-Kazakhs are now a core group of people that make up Kazakhstan, our history has to be depicted accurately as well.”

Some 107,130 ethnic Koreans reside in Kazakhstan, according to the Korean Ministry of Foreign Affairs. Around the world, there are 7.269 million overseas Koreans.

China has the largest ethnic Korean population at more than 2.7 million, and the Joongang Ilbo visited a Korean language school in Shanghai that had 410 students from kindergarten through middle school. The kids attend classes on the weekends.

“Even though I’m tired on the weekend and it’s difficult to wake up,” said student Um Jung-hoon, “it’s fun to go to play with friends and learn the history of the Three Kingdoms.”

“To learn about the roots of our people and keep our common identity, Korean language and history is very important,” said Lee Hye-soon, 57, the school’s principal. The school also encourages such activities as learning to play the samulnori (Korean percussion instrument) and other traditional instruments.

Korean education is a big priority in Yanbian, the Korean Autonomous Prefecture in southeastern Jilin Province near the North Korean border. Choi Ryeong-sun, vice principal of a Korean school located in Yanji, a city comprised mostly of ethnic Koreans, said, “To make sure our students don’t forget where they come from, they learn not only the Korean language but our traditional instruments, etiquette, wrestling and taekwondo.”

The school has 1,600 students. “But,” she added, “we don’t have enough history textbooks, unfortunately.”

There were 795,000 ethnic Koreans living in Yanbian in 2012, according to the local government.

Some places face difficulties offering Korean education, such as the Korean school in Moscow, which was established in 2002 but is running at a loss. Still, there are over 1,000 schools in Russia offering Korean classes for students.

Last month at a Korean school in Osaka, students celebrated a literature festival, which became a local event showcasing Korean culture. Many of the school’s students, fourth- and fifth-generation Korean-Japanese who aren’t fluent in the Korean language, practiced all summer long to put on a play based on the popular Korean tale from the Joseon Dynasty (1392-1910) of Heungbu, a generous man with a greedy older brother.

High school students learned how to make Korean street food such as ddeokbokki, or spicy rice cakes, and sold the dishes at stalls during the festival.

Osaka’s Geonguk School was established in 1946 with a two-track Japanese and Korean curriculum. It was accredited as a Korean educational institute in 1976 but faced a crisis in 2000 because of competition with other schools that don’t offer Korean classes.

Choi Cheol-bae, principal of the school, said diplomats, executives and business people in Japan were wary of sending their kids to Korean schools because they offered few advantages in the admission process to top colleges.

“I am scared that a place where we can give a Korean education to ethnic Koreans may disappear,” he says.

“Kids who are born in Japan are, we have to admit, closer to Japan,” says Sung Si-yeol, principal of another Korean school, the Geumgang School, “and it is true that it’s difficult for parents to insist on Korean education or set a Korean identity as a priority.”

Sung says Hallyu, or Korean wave of cultural exports, is the best thing that’s happened in that regard.

“With the growing Hallyu wave, there are more students who want to go to Korea and work there,” Sung said. “The Korean government needs to be active in providing information and opportunities for such students.”