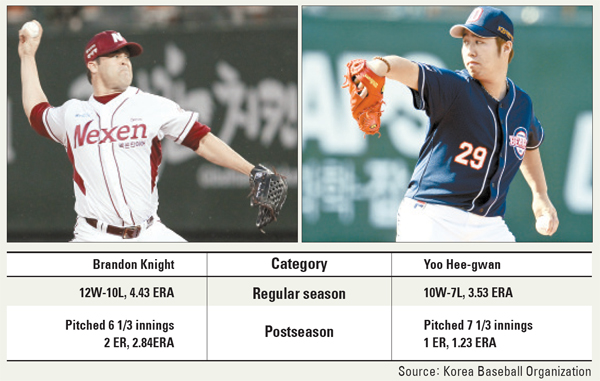 The Nexen Heroes and the Doosan Bears will have their last battle this evening to see who advances to the second round of the 2013 Korea Baseball Organization playoffs. The best of five series is tied 2-2 as the Doosan Bears won two straight home games at Jamsil Stadium during the weekend.

Knight pitched for six and one-third innings in Game 1, allowing only two runs. His sinker was sharp that game, contributing to the team’s 4-3 victory.

Knight wasn’t so good versus the Bears in the regular season as he earned just two wins in five games with a 5.26 ERA. But in those games, he did pitch significantly better in Mok-dong, where his average ERA against the Bears was 3.71.

Knight threw 96 pitches in Game 1 and has had a five-day rest.

The Bears’ Yoo has made some impressive starts in the Heroes’ home as well. He had pitched three games against the Heroes, earning one win and a loss with an ERA of 3.68. By comparison, the other Bears pitchers struggled at Mok-dong, with a combined ERA of 7.93 in the regular season.

Yoo started Game 2 for the Bears in Mok-dong, where he allowed only one run in seven and one-third innings.

Most of the Bears pitchers seemed like they were afraid of the Heroes’ cleanup hitter Park Byung-ho, who was the KBO’s 2013 home run king with 37 home runs, but Park hit 0 for 3 against Yoo in Game 2.

Since Yoo isn’t a fireball who can pitch a 95 mph fastball, the key for Yoo is locating his pitches accurately. 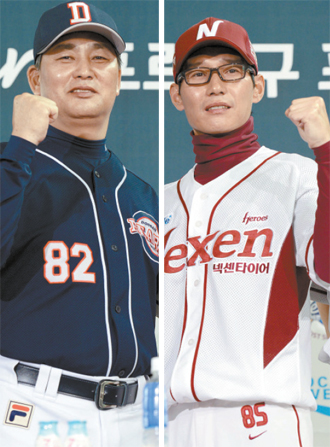 Left: Manager Kim Jin-wook of the Doosan Bears is considering using his ace pitcher Dustin Nippert as a reliever. Right: Manager Yeom Kyung-yeop of the Nexen Heroes expects his cleanup hitters to shine in the elimination game.

Yoo threw 105 pitches in Game 2 and has had a four-day rest. The three times this season he pitched with just four days of rest, he earned two wins and a loss.

Analysts predicted that this series would produce lots of runs and hits as the Bears led the league in team batting average in the regular season at .289 and the Heroes were fourth among nine teams at .272. But such predictions have not been on target so far.

The Heroes need their biggest slugger, Park, to get back in shape. He showed off his power by blasting a solo home run in his first career postseason at bat in Game 1, but was hitless in Game 2 and 3 and had just one double in Game 4. Park is hitting .143 (2 for 14) in four games, with one home run, one RBI and four runs, having been walked three times and hit by a pitch once.

“He will get back in shape,” Heroes manager Yeom Kyung-yeop told reporters. “He has been good at home during the regular season.”

“But he needs a little support from the other hitters, such as center fielder Lee Taek-keun, who will bat third, and shortstop Kang Jung-ho, who will bat fifth in the lineup,” Yeom added.

The Heroes only allowed 11 runs over the last four games, for an average of 2.75 runs per game, meaning that the pitchers are doing their jobs well.

The Bears also need some results from their 25-year-old cleanup hitter Kim Hyun-soo, who left the field during Game 4 after a minor injury. He walked in the first inning, then made it to second after the following hitter was walked, too. But he was then replaced by pinch-runner Jung Soo-bin due to pain in his right ankle.

“I think he can play for Game 5,” Jeon Jae-chun, the Bears’ chief trainer, told Ilgan Sports. “But he needs to be carefully examined after the season is over.”

While the best hitter struggled in previous games, the Bears were able to remain in the postseason thanks to some unsung heroes. In Game 3, infielder Lee Won-seok hit a walk-off single in the 14th inning and catcher Choi Jae-hoon blasted a go-ahead two-run home run in Game 4.