With win, Vettel closes in on F1 championship

With win, Vettel closes in on F1 championship 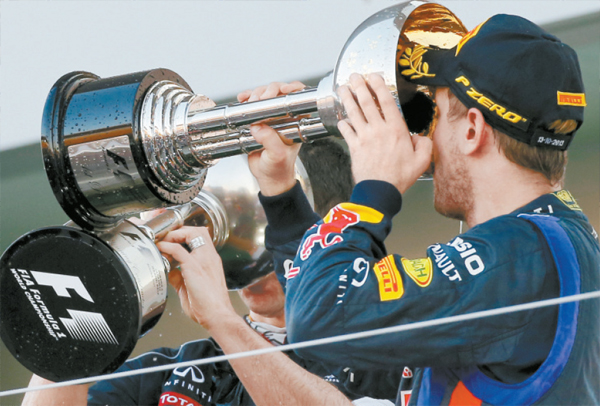 SUZAKA, Japan - Red Bull’s Sebastian Vettel won the Japanese Grand Prix on Sunday but was made to wait for his fourth successive Formula One title after Ferrari’s Fernando Alonso finished fourth.

The 26-year-old German’s fourth win at Suzuka in the last five years left him with a lead of 90 points over Alonso with four races, and a maximum 100 points, remaining. The next up is India on Oct. 27.

Vettel’s Australian teammate, Mark Webber, who had started on pole position, finished 7.1 seconds behind in a Red Bull one-two with Frenchman Romain Grosjean taking third place for Lotus on a sunny afternoon at the Honda-owned track.

“Ichiban [first], Ichiban,” Vettel shouted in Japanese over the team radio, whooping in delight after taking the checkered flag at the end of a race that hinged on his ability to do two stops to Webber’s three.

It was Vettel’s fifth win in a row, ninth in 15 races this season and 35th of his career.

Asked on the podium about the championship, with the passionate crowd roaring in approval, he added: “Obviously we have a very good gap but we still keep pushing ... it looks very good at this stage but it’s not over until it’s over.”

Alonso, who became Formula One’s leading all-time points scorer, had no illusions about his chances.

Webber always knew he was going to have a battle on his hands with his teammate, but it was Grosjean who seized the lead with a storming start from fourth while both Red Bull drivers were slow to react.

Vettel made contact with Lewis Hamilton’s Mercedes, with the Briton first suffering a puncture that sent him to the back of the field and then retiring.

“The floor was destroyed ... I was a second and a half to two seconds off the pace and the car was pulling to the right. It’s a good job they pulled me in,” said the 2008 world champion.

The Red Bull emerged unscathed, with the team reassuring a concerned Vettel, and the German settled into third place at the end of the opening lap.

“A horrible start and then a fantastic comeback,” declared the beaming Vettel, who took the lead for the first time on lap 13 after Grosjean and Webber had pitted.

The lead changed between the three over the race according to pit stops, with Webber making his final stop 11 laps before the finish.

The Australian had hoped to claw back the deficit but could not get past Grosjean until the penultimate lap, by which time Vettel was nine seconds clear and out of reach.

Kimi Raikkonen was fifth for Lotus with Nico Hulkenberg sixth in the Sauber.

Sauber’s Mexican Esteban Gutierrez became the first rookie driver to score a point this season with seventh place for Sauber.

Nico Rosberg put some points on the board for Mercedes, who slipped further behind Ferrari in third place in the championship.