LPGA rivals to tee off in Korea

LPGA rivals to tee off in Korea 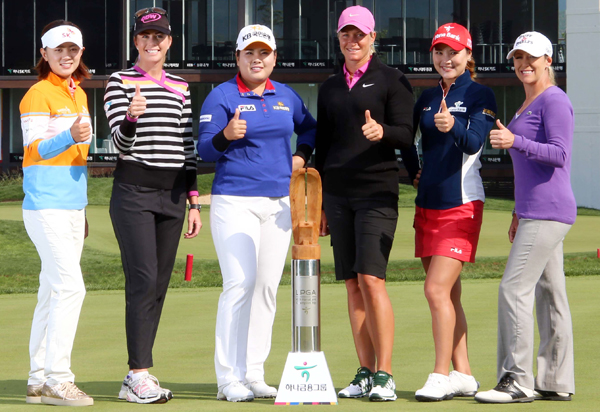 Dozens of the world’s best golfers, including Koreans Park In-bee - the world No. 1 - Choi Na-yeon and Ryu So-yeon, along with Suzann Pettersen of Norway and Michelle Wie and Paula Creamer of the U.S., will compete for a $1.9 million prize in the LPGA KEB-HanaBank Championship, which tees off today at the Sky 72 Golf Club on Yeongjong Island off Incheon.

Seventy-eight players, including the top 59 from the LPGA, the top 12 from the Korean LPGA and seven invitees, including Grace Park, who declared her retirement last year after finishing the second round of the Wegmans Championship, will compete in the event that runs until Sunday. The winner takes $285,000.

The KEB-HanaBank Championship is the only LPGA tournament being staged in Korea. Fans expect a Korean player to win not only because it is staged here but also because it is the 25th anniversary of the first victory by a Korean golfer - Ku Ok-hee in 1988 - on the LPGA Tour.

The event’s best contender is Park. She said on Wednesday that she has changed her putter and driver shafts to improve her accuracy in putting.

“In order to win LPGA’s Player of the Year award, I’m not going to participate in a local championship that will be hosted by my own sponsor [KB Finances] next week. I think I should win this one,” Park said.

By winning the U.S. Open in June, Park became the first golfer to win three straight major tournaments since 1946. Park was going for a “Calendar Grand Slam,” by winning four major tournaments in one year, but has struggled since then.

“I think I’m not playing like I did in the beginning of the season,” Park said. She quickly tried to solve problems. She started using driver shafts that are 10 grams (0.35 ounces) lighter than the ones she used to play with at the Reignwood LPGA Classic that was held earlier this month in China. She took fourth place in that event.

But she had problems with putting in the LPGA Malaysia event. She averaged more than 30 putts in each round, finishing the event tied for 32nd. “I will play like the world No.1 in front of Korean fans,” she said.

Park’s biggest rival is Pettersen, the world No. 2 who said, “My condition is the best ever. I will chase Park [to win the player of the year] until the end of the season,” showing her fighting spirit.

Park said winning the KEB-HanaBank Championship would give her some insurance toward being the first Korean to win the Player of the Year award.

“It was a hard decision that I decided not to play in an event that will be hosted by my own sponsor,” Park said. “But I asked them [KB] to understand the situation because the competition is very high now.”

The championship will be the final event for veteran Grace Park, 33, who won six titles in her 13-year LPGA career. “I feel great because I was able to meet many co-players who used to spend time together at golf clubs for the first time in 16 months,” she said. “I think this event will be a very special one for me.”

Choi Na-yeon, 25, is aiming to win her first tournament of the season. Choi, the world No. 9, won the KEB-HanaBank Championship in 2009 and in 2010. “I think I was too aggressive during the season,” Choi said regarding her winless season. “I’m trying to concentrate on my play.”