From third from left: Doosan and KCCI Chairman Park Yong-maan, Industry Minister Yoon Sang-jick and other participants pose at the opening ceremony of Entrepreneurship Week 2013 held at the Korea Chamber of Commerce and Industry headquarters in central Seoul yesterday. [NEWSIS]

President Park Geun-hye pledged to?get rid of unnecessary regulations on businesses to boost investment and create jobs amid continuing doubts by companies about improvements in the economy.

At yesterday’s opening ceremony of the sixth annual Entrepreneurship Week - hosted by the Ministry of Trade, Industry and Energy, the Korea Trade-Investment Promotion Agency and Woori Bank - Park highlighted the need to end excess regulation? to encourage companies to increase investments.

“The government will radically remove unnecessary regulations to encourage entrepreneurs and to establish a healthy ecosystem for increasing investment and jobs,” Park said in a speech delivered by Industry Minister Yoon Sang-jick.

The president urged the business community to create a second period of miraculous growth with “creative innovation and challenging spirits.”

Her remarks were made in the midst of sluggish business investment and falling corporate tax revenue resulting from declining operating profits of major companies.

Except for Samsung Electronics, which had more than 10 trillion won ($9.35 billion) in operating profit in the third quarter, other local businesses saw significant falls. Posco, the nation’s top steelmaker, posted a 38 percent decrease in its Q3 operating profit. Energy leader SK Innovation’s plunged 57 percent. Samsung SDI, an affiliate of Samsung Electronics,?witnessed a whopping 66 percent drop in the same quarter.

Due to poor performances of major companies, the nation’s tax revenues are suffering. As of July,?a total of 22.2 trillion won was collected in corporate income tax,? down 4.2 trillion won from a year earlier, according to data from the National Tax Service.?

According to the Bank of Korea last week, facilities investments rose 1.2 percent in the third quarter compared to the previous quarter. Investment grew 1.8 percent year-on-year. 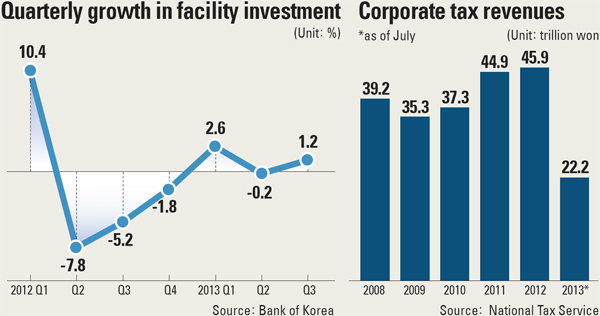 Despite improved indicators, analysts say there are not many companies that actually feel any improvement.

“The government says the growth rate is 3 percent, but companies’ performances have actually contracted,” said Choi Bae-geun, an economics professor at Konkuk University. “Except for Samsung, the domestic market and overseas markets are both unfavorable for companies.”

An executive at a conglomerate said some businesses can’t make new investments now due to an absence of leadership because their top managements are in legal trouble.

“About 80 to 90 percent of facilities investments is by companies’ existing projects, but the remaining 10 percent can only be filled by new projects,” he said. “But as seen in the cases of Hanwha, CJ and SK, they can’t make decisions to make new investments since their chairmen are in jail.”

Industry Minister Yoon said in his own speech that his ministry will increase business’s appetite for investment by easing some excessive environmental regulations. The minister also pledged to support pending investment promotion bills at the National Assembly.?

“Please look at the current situation as if a bus was clinging to the edge of a cliff and the passengers on that bus are our people,” Hyun said at a meeting in Sejong.

Last week, he said there are about 100 bills written by the government to boost the economy that are blocked by lawmakers. One of them promotes foreign investment by easing regulations on stakes in joint ventures.