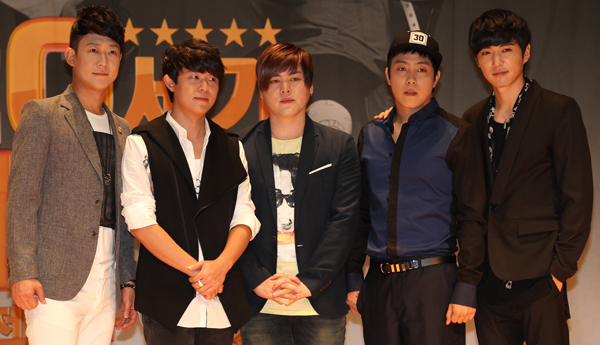 From left: Myung-hoon of NRG, Tony and Hee-joon of H.O.T., Eun Ji-won of Sech Skies and Danny of g.o.d. [JoongAng Ilbo]

While new pop stars are constantly on the rise (and fall), many older fans still fondly recall their favorite idols from the 1990s, when K-pop first was becoming a phenomenon.

Now, thanks to cable channel QTV’s “Handsome Boys of the 20th Century,” five members from some of the biggest bands of yesterday have teamed up to create a new pop group called H.S.g.R. - “H” being Moon Hee-joon and Tony from the group H.O.T., “S” is Eun Ji-won of Sechs Kies, “g” is Danny of g.o.d., and the “R” is Myung-hoon from NRG.

Since “Handsome Boys” is now in its second season and H.S.g.R. appeared on the KBS hit show “Immortal Songs” in June, talk is growing that the retro group could grow into something more serious.

Q. Have you guys been receiving many requests to perform as H.S.g.R.?

Hee-joon: Yes, we’ve been getting a lot of offers. But it is not easy for us to perform on stage because we don’t have our own songs. Plus we never anticipated this kind of response, so we haven’t had enough time to prepare. But as soon as we’re ready, we will go for it.

Do you want to release an album as H.S.g.R.?

Myung-hoon: I want to do that. I love that people in their 30s and 40s laugh and enjoy watching us.

Ji-won: But I don’t want to hurry things too much, as there is a big chance the album could fail.

What is the biggest difference between you, as first generation K-pop stars, and today’s stars?

Tony: In our day, we thought that we have to stay with the company we signed with until death. Because we didn’t really have a separate vocal coach, we just had one another to practice with. Nowadays, trainees share information online and move to other agencies that offer better conditions. Those things were unimaginable during our times.

Ji-won: Trainees have seen good and bad cases from their predecessors, so they know how to prepare.

What is a good thing about being in this team?

Danny: No one is domineering over the others. Of course we have different opinions, but we can just talk things out.

You are all in your late 30s. Doesn’t anyone want to get married?

Hee-joon: I haven’t gotten permission from my fans, so I can’t. They are the ones who stood by me when I was having hard times and supported me endlessly. I’m allowed to be in a relationship, but they said I should never get caught. So I asked them to allow me to marry by the time I’m 45.

Tony: I don’t have any plan. My girlfriend just started her singing career [Hyeri of Girls Day], so I can’t turn her into a married woman. I’ll think about it when her contract expires.