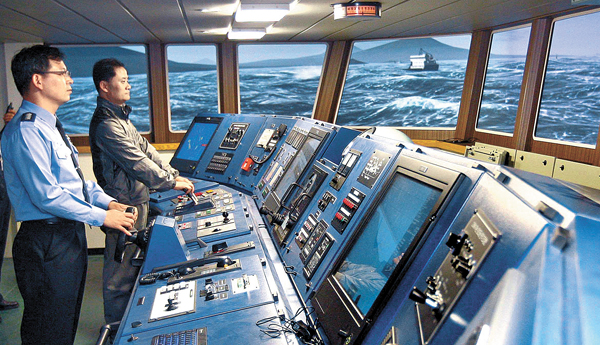 YEOSU, South Jeolla - The Korea Coast Guard Academy is set to open a new campus this month in the port city of Yeosu, South Jeolla, according to institute officials, which will boast an array of new technology, including a simulation center.

“The new campus is designed so that it can simulate all situations that can happen on the sea or in a vessel, and educate and train people on these situations,” said Lee Ju-seong, who heads the academy. “Our goal is to strengthen Coast Guard and maritime police officers’ abilities so they can operate in various situations at the highest possible level.”

The operation room in the center - some 60 square meters (71.8 square yards) in dimension - transports users straight to the bridge of a 3,000-ton patrol vessel and comes complete with a digital nautical map, a radar and engine controlling equipment. Images of rough waves could be seen through the windows of the simulated vessel, giving the impression of motion.

“Advance full speed!” called out Yang Bong-kyu, 44, who is in charge of the simulation operation department at the academy.

An officer followed his command and lowered a control lever.

The sound of waves lapping on the side of the vessel could be heard.

“The room is not actually shaking, but because of the visual effects seen through the window screen, the sensation of moving is created,” Yang explained to a JoongAng Ilbo reporter who visited the facility last week.

Weather conditions can be switched out, and officers can also practice sailing and docking, he said. Other simulators can also mimic vessels of varying sizes.

Another training site is built to resemble the interior of a 500-ton patrol vessel so officers can practice rescue operations in unfavorable conditions. Wafts of smoke filled the vessel during one simulated fire rescue operation.

Officers can also practice rescues through various drills in the center. Operators can simulate a sinking ship, and even a helicopter descent landing.

Starting this month through Nov. 10, the Coast Guard Academy will move from its former location in South Chungcheong to the Yeosu campus.

Following a test run after the move, some 70,000 maritime police officials will begin training in December at the new campus. The school will also change its official name from “academy” to “training institute.”