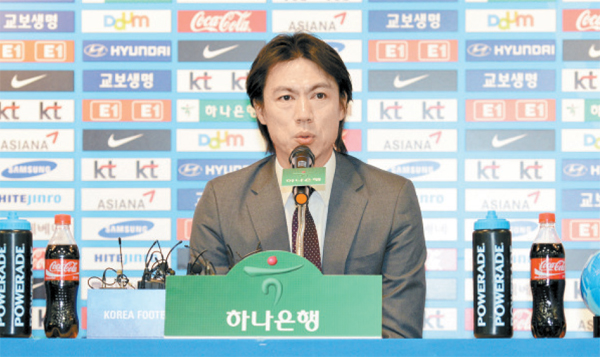 Striker Park Chu-young of Arsenal, who is having a hard time getting chances to play in the English Premier League, has been again excluded from Korea’s national football team, which will have two friendly matches this month.

While Park wasn’t included on Hong’s roster, 196 centimeter tall (6.43 feet) striker Kim Shin-wook of Ulsan Hyundai FC will be back on the national team for the first time since July’s East Asian Cup. Ulsan Hyundai is at the top of the K-League Classic, thanks to Kim, who is the leading scorer with 18 goals. In late October, Park appeared in an official Arsenal match for the first time in the last 19 months and played for about 10 minutes, but Hong thinks that isn’t enough experience to put him on the national team.

“The matches against Switzerland and Russia are very important for us because they are the last A-matches this year,” Hong said. “As I wanted to improve the team’s organizational power, 19 of those who were included on the team had played in matches either against Mali and Brazil that we had in October.”

Regarding the tall striker, Hong said, “I think Kim can bring many offensive options for the team and he has been playing well in the K-League. And I wanted to see how Kim plays with other players, especially those who are playing in foreign leagues.”

But Hong said the Arsenal striker isn’t ready to play for the national team because he hasn’t had enough playing time on his own club team. Hong said that Park needs to find a new team so that he can get more experience in order to be included on the national team. “I will carefully look at the upcoming winter transfer season,” Hong said.

Midfielder Koo Ja-cheol of Vfl Wolfsburg has been excluded this time due to a right ankle injury he sustained in the match against Mali on Oct. 15. Defender Kim Chang-soo of Kashiwa Reysol, who has consistently played for Hong’s team since the 2012 London Olympics, was left off the roster as well due to a left ankle injury. Center midfielders Ha Dae-sung, the captain of FC Seoul, and Lee Myung-joo of the Pohang Steelers were both excluded. Ha’s teammate, Ko Myung-jin, will fill Ha’s spot and winger Nam Tae-hee of Lekhwiya SC of Qatar will fill Koo’s spot.

“I will try to adapt to coach Hong’s strategy,” Kim of Ulsan Hyundai said. “I have been preparing well to play on the national team and I got a chance to prove my talent. I will show what I have on the field and try to impress Hong to play in the 2014 Brazil World Cup.”