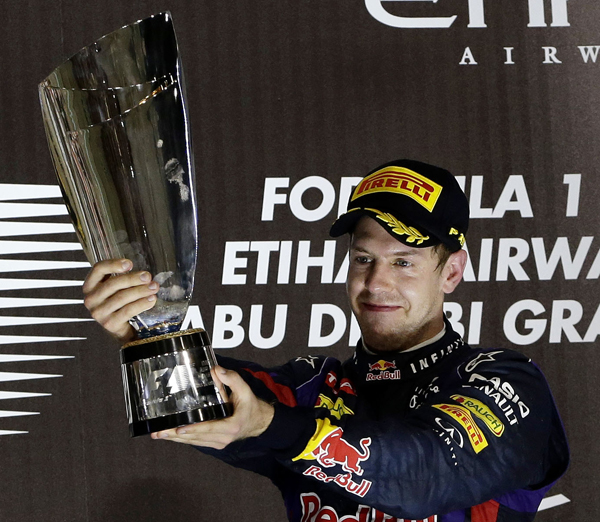 The 26-year-old Red Bull driver was in a league of his own, 40 seconds clear at his second pit stop and then taking the checkered flag half a minute ahead of second-place Australian teammate Mark Webber.

Vettel has now won 11 races this season, 37 in his career, and his seventh success in a row equaled the single-season tally racked up by fellow German Michael Schumacher in 2004.

The all-time record of nine was set by Italian Alberto Ascari, although that was over two seasons in 1952-53, and nobody would bet against Vettel equaling that number before the year is out with races in Austin, Texas and Brazil to come.

To celebrate, Vettel pulled over on his slowing down lap and performed more of the smoking “doughnuts” that landed him in trouble last weekend in India, where he captured his fourth successive championship.

“Just bring the car home into the garage,” race engineer Guillaume “Rocky” Rocquelin told him, probably knowing already the futility of his words.

“Yeah, yeah, yeah. I know what I’m doing,” replied Vettel, echoing the famous words of Kimi Raikkonen on his way to victory in Abu Dhabi last year in response to unwanted advice from his Lotus team.

Watched by his parents, Vettel led every lap of the Abu Dhabi race, beating pole-sitter Webber into the first corner and disappearing into the night. So dominant was the German that the television cameras soon tired of following him in his splendid isolation, focusing instead on the battles being waged behind him.

Germany’s Nico Rosberg was third for Mercedes, 33.6 seconds behind, with Frenchman Romain Grosjean ending a run of three podium finishes with fourth place.

Ferrari’s Fernando Alonso, crossing the finish line more than a minute after Vettel, came fifth, although the Spaniard was under investigation for breaching the track limits while overtaking. Reuters