Projects eating too much of the budget, report says

Projects eating too much of the budget, report says 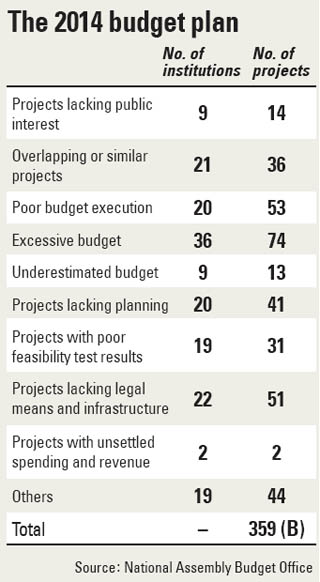 Amid concerns over the deteriorating fiscal health of the government, the National Assembly Budget Office (NABO) found that next year’s budget contains a significant amount of wasteful spending.

The NABO said yesterday it has found that 21 public institutions under different government branches are planning to spend the 2014 budget on 36 similar or overlapping projects and that the budget on 74 projects at 36 institutions has been overestimated.

The findings, by 33 analysts from the organization, will later be used to readjust the government’s budget plan. The total government spending for next year is a proposed 357.7 trillion won ($332.9 billion), up 4.6 percent - or 15.7 trillion won - from the 2013 budget, the Ministry of Strategy and Finance announced in late September.

The analysts found that a total of 359 projects had inappropriate spending projections. Of them, 346 items were found to be wasting taxpayers’ money. The most serious problem with the government’s budget plan, according to the NABO report, was the number of overlapping or similar projects, with some calling for an excessive amount of money. Others had earmarked significant amounts without showing the need for such funds.

The report pointed out that the Finance Ministry earmarked 50 billion won for a new project that increases support of Korea Credit Guarantee Fund for small businesses, but the project is similar to the one proposed by the Korea Technology Finance Corporation. The two institutes are both under the Financial Services Commission.

“The total expenditures for major projects next year is 466.2 billion won, accounting for 99 percent of the total budget spending,” said Hyun Seung-cheol, one of the analysts. “The Finance Ministry needs to adjust the expenditures.”

As the Finance Ministry reduced its estimated revenue to 370.7 trillion won, down 0.5 percent from 372.6 trillion won this year, the government’s coffers are shrinking amid persisting uncertainties in the global financial market, prolonged economic slowdown in various countries and decreasing tax revenue.

The country is likely to face a 25.9 trillion won fiscal deficit next year when non-budget items are added in, particularly the four national insurance schemes.

In the first half of this year alone, the government’s fiscal deficit stood at 46.2 trillion won, up from 29.9 trillion won in the same period last year.

Although Korea’s fiscal status compared to other major economies is relatively sound, concerns are increasing because tax revenue sources have been depleting while national debt is on the rise. Total national debt is expected to surpass 500 trillion won next year, according to a report by the Finance Ministry.