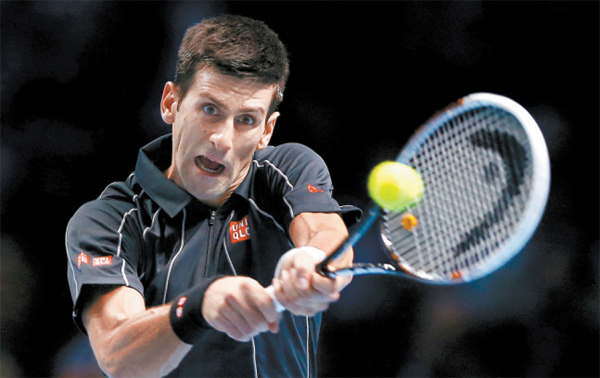 Novak Djokovic of Serbia hits to Roger Federer of Switzerland during their ATP World Tour Finals match at the O2 Arena in London, Tuesday. [AP/NEWSIS]

Playing his first round robin match at the elite tournament this year, Djokovic extended his winning streak to 18 matches after capturing his sixth title of the season last week in Paris, where he defeated Federer in the semifinals.

Djokovic is trying to finish No. 1 for the third year in a row but Nadal, who eased past David Ferrer 6-3, 6-2, needs only one more win in London to be guaranteed the top spot.

This 31st encounter between the two rivals - a remake of last year’s final - produced a somewhat disjointed match laced with unforced errors and flashes of brilliant tennis leaving both players looking exhausted toward the end of the match.

Federer and Djokovic easily held their serve until the ninth game when the Serb found himself 15-30 down.

A double fault gave Federer his first break point, but the former World No. 1 sent a forehand wide on the next point before Djokovic took the next two points to hold his serve.

The Serb earned two break points in the next game with a superb backhand return. The cheering from the legion of Swiss supporters packed in the stands did not help Federer as he fluffed a forehand to lose the set.

After rallying from 0-40 to break Djokovic for a 3-2 lead in the second set, Federer dropped his serve in the next game, double faulting after the Serb earned a break point with a backhand that hit the net cord before going over.

Serving for the set at 5-4, Federer made another unforced error on his usually reliable forehand to squander a set point. Djokovic seized his chance, sending Federer in the ropes with a stretched cross-court winner before leveling at 5-5 as Federer smashed a ball towards the scoreboard hanging over the court in frustration.

Federer kicked back into life in the tie break, winning the last five points with a string of beautiful shots including a backhand volley, a cross-court winner and a perfect lob that Djokovic failed to return.

Djokovic looked unfazed at the start of the third set to break Federer to love. He then saved a break point to consolidate his lead before taking Federer’s serve again after a long rally for a 4-1 lead, and sealed out the match on his first chance.

For Rafael Nadal, playing indoors will never be ideal. The Spaniard has won all four Grand Slam tournaments and the Olympic title in his career but has never triumphed at the season-ending ATP World Tour Finals.

“I like the sunshine,” Nadal said when asked about the difference between playing indoors and outdoors after crushing Ferrer. “The feeling on the ball, on your racket, is different” when playing indoors.

The conditions didn’t seem to bother him Tuesday as he beat David Ferrer 6-3, 6-2 on the indoor court at London’s O2 arena. AP