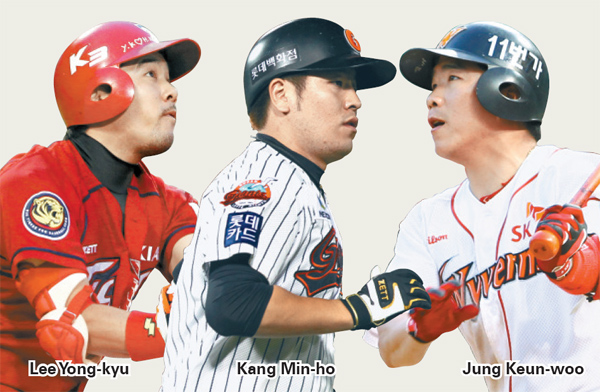 The Korea Baseball Organization’s 2014 free agent market is shaping up to be the largest in its history as many big-name players, such as Lotte Giants catcher Kang Min-ho and Kia Tigers center fielder Lee Yong-kyu, are now free agents. Also, teams such as the Hanwha Eagles, which have been at the bottom of the league for a few years, are predicted to open their wallets in a bid to improve their rosters.

The No.1 free agent in this hot stove season is 28-year-old Giants catcher Kang. There are big-name pitchers in the league, such as Kia Tigers ace Yoon Suk-min and Samsung Lions closer Oh Seung-hwan, but as the two already have declared that they will go to a foreign league next season, fans’ attention is focused on Kang, who is the first catcher in KBO history to become a free agent in his 20s. He is also free from serving military duty, because he was a member of the gold-medal-winning Korean baseball team in the 2008 Beijing Olympics.

“Despite the poor season, the Giants will try not to lose their franchise star as they have been strongly criticized by fans for not signing their big-name free agents in the past few years,” Lee added.

In 2011, the Giants failed to re-sign their best slugger, Lee Dae-ho, and their outfielder, Kim Joo-chan. Lee also became a free agent this winter after playing for Japan’s Orix Buffaloes for two years, and Kim now plays for the Kia Tigers. There are rumors that more than two teams, including the 2013 KBO champions, Lions and LG Twins, are considering bidding for Kang. The Lions’ starting veteran catcher, Jin Gap-yong, turns 39 next year, and the Twins have been looking for a big-name catcher after they lost Cho In-sung in the last offseason.

Tigers’ center fielder and leadoff hitter Lee, Doosan Bears’ center fielder Lee Jong-wook and SK Wyverns’ second baseman Jung Keun-woo, all of whom were members of the Korean national baseball team that participated in international events such as the World Baseball Classic and the Olympics, are also free agents. The Tigers’ Lee, 28, had surgery on his left shoulder in September and is in rehab but is predicted to be back on the field by May at the latest. The surgery is not expected to impact his signing. Lee hit .295 with 115 hits and 21 stolen bases in 100 games this season.

There are teams that are willing to take a chance on signing these big-name players. The Hanwha Eagles, who finished the season in last place, will potentially be the biggest investor. Sources in the KBO said the Eagles plan to spend about 15 billion won in the hot stove season with the money they received from the Los Angeles Dodgers last year as part of the $25.7 million posting fee for their former ace, Ryu Hyun-jin.

“We can’t reveal the names, but we can say that we are aiming for two top free agents,” said Kim Jong-soo, spokesman of the Eagles. As the team has had a hard time finding a decent leadoff hitter and outfielder, analysts said they would bid for one of the two Lees (from Tigers or Bears) and their second option would be Lee Dae-hyung, 30, the LG Twins center fielder.