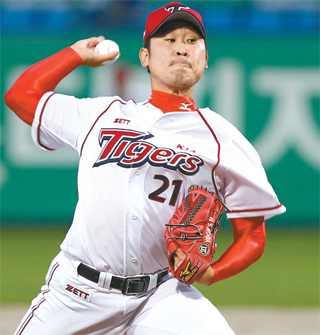 So far, the 27-year-old right-hander is drawing interest from several teams, including the New York Yankees and Minnesota Twins. Frankly, the key to Yoon joining Ryu in the big leagues will likely depend on his durability and fast slider.

It is no secret that Ryu’s best pitch is his changeup. In his debut for the Los Angeles Dodgers against the San Francisco Giants, the Giants looked like they had studied Ryu’s pitching style well. They didn’t chase after many changeups and instead focused on attacking his fastballs, which were mostly in the range of 89 to 91 miles per hour in April’s chilly weather. Then, Ryu started throwing more sliders and curveballs. That worked well temporarily. But the reason he was able to end the season with 7.22 strikeouts per nine innings was because of his changeup, which MLB skippers rated as one of the best in the National League.

According to a scouting report filed by Sports2i, which provides official statistical information to the KBO every year, Yoon is capable of throwing six different pitches: a four-seam fastball, sinker, slider, changeup, curveball and forkball.

His best breaking pitch is a fast slider between 80 and 84 miles per hour, which rarely hits 85 or 86 miles per hour. Yoon often throws it as a put-away pitch. In the 2011 season, his best in nine years in the KBO, he started 27 games and had 178 strikeouts in 172 and one-third innings.

But the scouting report said the speed of his slider has decreased and that it happened when he tried to develop slow sliders that move like a slurve, which is about 5 to 7 miles per hour slower than his fast slider. Yoon stopped throwing the slow sliders this season. He said people will soon see his fast sliders, but it seems like he should concentrate more on locating his slider in the right spots.

“Ryu’s changeup wasn’t only a put-away pitch,” analyst Son Hyuk said. “It also drew tons of ground balls, especially in scoring positions. He was able to do that because his changeup hit the right spots. Because Yoon is a pitcher who produces many Ks and flyball outs, control is the biggest issue for him. I think the speed of his fastball and slider won’t cause problems when I looked at Ryu’s debut season.” Ryu induced 26 double plays, mostly with changeups, the third-most in the NL.

Yoon’s four-seam fastball ranges from 90 to 92 miles per hour and sometimes hits 95 miles per hour. He often throws his 80 miles per hour changeup as a first pitch to batters and throws an 83 to 85 miles per hour sinker to the inside corner against right-handed hitters. By altering his grip on the changeup, he can get it to move like a palm ball. He also throws a 75 miles per hour curveball and a 75 to 77 miles per hour forkball, but usually only with a count of 0-2 or 1-2. His slider isn’t as good as Ryu’s changeup, but Yoon has better third and fourth pitches.

In four seasons as a full-time starter, Yoon averaged 11 wins, a 2.92 ERA and 134 strikeouts in 160.5 innings. In Ryu’s KBO career, he had two seasons in which he pitched 200 or more innings and three seasons in which he pitched 180 or more innings. Ryu pitched 192 innings this season, the 25th most in the National League, but Yoon has never pitched 180 innings or more in a season. It is questionable whether he will be able to endure a full season as a major-league starter because he would be given five or six more starting opportunities with long-distance trips due to the longer MLB season.

Yoon is known as a somewhat hot-tempered guy - a reputation he probably earned from the locker-punching incident. In a game against the Wyverns in June 2010, he allowed only one run through eight innings and had a 3-1 lead, but was replaced with a reliever after giving up another run in the top of the ninth inning. The Wyverns won the game, 4-3, as the Tigers’ relievers failed to save the game. Some said Yoon was mad because he didn’t get the win, but he claims he was mad because he put the team in a difficult position in the late innings.

Yoon is a team player. When he decided to join the Korean national team for the 2013 World Baseball Classic, many people, including some of his teammates, told him it was a risky decision. Because the military duty exemption didn’t apply to the WBC event, many big-name players hesitated to join the team. But Yoon joined, saying, “I can’t ignore the country’s request because I received many benefits.” Yoon was a member of the Korean team that won the gold medal in the 2008 Beijing Olympics, which exempted him from military duty.

This season, Yoon was like the team’s fireman. He began the season in the starting rotation but Tigers’ skipper, Sun Dong-yul, asked him to be the closer as the team’s bullpen was one of the league’s worst. He often pitched more than two innings, sometimes in losing situations. “I know it was an important year for me, but the team was in a very difficult situation as many pitchers struggled during the season,” he said.

“Skipper Sun completely misused Yoon,” an analyst who requested anonymity told the Korea JoongAng Daily. “It didn’t help him to be in good shape. Teams considering acquiring Yoon need to give him enough time so he can demonstrate who he really is. They need to know how the Dodgers were patient with Ryu when he struggled in his first couple of appearances in spring training. He is a guy who definitely has some MLB-level stuff.”

An $8 million contract for two years would be a good deal for Yoon. But he shouldn’t be in a hitters’ ballpark such as Yankee Stadium or Coors Field, given his fastball-slider combination.