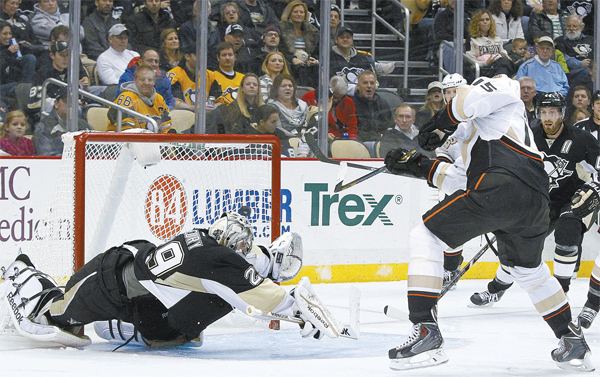 When Pittsburgh Penguins coach Dan Bylsma shuffled the lines in search of a spark for his slumping offense, putting Evgeni Malkin and rookie Brian Gibbons on the ice together wasn’t what he had in mind.

Gibbons converted a slick backhand pass from Malkin for his first NHL goal at 3:56 of the third period, starting a late burst as the Penguins beat the weary Anaheim Ducks, 3-1, on Monday night.

Called up from the minors 12 hours before the opening face off, the 25-year-old Gibbons was thrown immediately onto Pittsburgh’s third line. He ended up on the ice with Malkin after the Penguins were caught in the middle of a shift change.

While watching Malkin do a full lap through the Anaheim zone, Gibbons sprinted to the slot, took the pass and sent a shot over Viktor Fasth’s right shoulder to break a scoreless tie.

“I was just trying to get to the net and bang home a rebound or something,” Gibbons said. “Somehow it ended up right on my stick.”

Anaheim’s Ryan Getzlaf quickly pulled the Ducks within one, but Sidney Crosby’s 10th goal of the season capped a flurry in which the Penguins scored three times in just over four minutes.

The outburst was a welcome development for a team that for all its considerable offensive talent has struggled to score recently. The Penguins came in riding a 1-4 slump, scoring just one goal in each of the four losses.

“It was actually a good game for us,” Bylsma said. “We wanted to be in that tight game and stayed the course and came through with a couple of big goals.”

Marc-Andre Fleury stopped 26 shots for Pittsburgh as the Penguins leapfrogged Washington to move back into first in the Metropolitan Division. The teams will meet in the nation’s capital on Wednesday.

Getzlaf’s fifth goal in four games provided all of the offense for the Pacific Divison-leading Ducks, who earned just one point during a four-game East Coast road trip. Fasth made 24 saves but struggled in the final 20 minutes.

“I’m not seeing any secondary scoring from anybody,” Anaheim coach Bruce Boudreau said. “When you don’t have four lines contributing scoring it’s tough to win. I don’t care how good the guys are, it’s tough to win.”

“We’ve been getting chances and stuff and we’ve been working hard, but like I said we’ve had sickness and injury throughout our team and we haven’t dealt with it well this trip,” Getzlaf said.

The Penguins have their own issues, particularly an offense that has looked spotty at best. Bylsma decided to experiment. He moved Pascal Dupuis from the top line with Crosby to the second line with Malkin, replacing Dupuis with Beau Bennett. Jussi Jokinen, second on the team in goals, was bumped down to the third line to give Sutter a little help. The initial results were underwhelming.

Then again, Anaheim had a little something to do with it. The Ducks, in the midst of their first rough patch following a brilliant start, dominated the first period. They clogged passing lanes, gave Pittsburgh’s talented forwards little room to freelance, and controlled play for long stretches. Pittsburgh didn’t record a shot on Fasth until 2:02 left in the first period, when Bennett managed to redirect a pass from Crosby into Fasth’s chest.