Consumers spend less even as their incomes rise

Consumers spend less even as their incomes rise 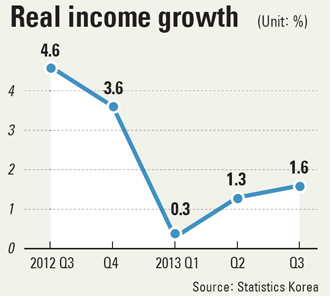 But private consumption remains sluggish, as expenditures are not rising as much as income.

According to Statistics Korea, the average monthly income of households rose 2.6 percent to 4.26 million won ($4,014) in the third quarter from a year earlier. Adjusted for inflation, that represents 1.6 percent growth.

The monthly average disposable income stood at 3.45 million won, up 3.1 percent from the first quarter.

Real consumption expenditures of households, adjusted for inflation, fell 0.1 percent to 2.49 million won on average during the same period.

Nominal consumption expenditures expanded 1.1 percent due to more than 6 percent growth in spending on housing and household goods.

“Compared to the second quarter, consumption is gradually recovering, but the pace isn’t fast enough,” said an official at the Ministry of Strategy and Finance.

Income growth was seen in all five income brackets, but the bottom 20 percent saw the slowest pace due to decreases in earnings, with the number of temporary workers falling by more than 100,000 in the third quarter.

Households saw an average 8.6 percent increase in their surpluses, the report said, the most since the third quarter of 2003.

The Finance Ministry said both real and disposable income grew owing to 1.1 growth in gross domestic product in the third quarter. Stabilized inflation also boosted real incomes, the ministry said. Consumer price growth has remained in the 1 percent range for the past seven months. But the ministry considered the growth rates still insufficient to encourage people to spend more.

“Amid low inflation, policies to offer financial support for education costs and the introduction of thrifty cell phones are major causes of flat consumption,” said the official. “But in the next quarter, households might spend more since they had surpluses in the past three months, improving the consumer sentiment.”