Securities analysts find a lot to like in 2014 stocks

Securities analysts find a lot to like in 2014 stocks 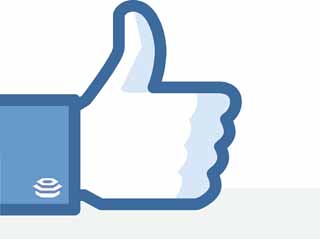 While many brokerage firms in Korea have forecast a bullish 2014 for the local stock market, they warn that a high index does not necessarily mean all investors will profit from securities.

According to an analysis by the JoongAng Ilbo of 2014 Kospi outlook reports released by 10 securities firms, whether investors will smile or frown will depend on what stock they hold.

Based on the analysis, brokerage firms note that the answer to profiting from stock investments is to look for large-cap stocks that are economy sensitive, at least through the first half of next year. Of the 10 securities firms, six brokerages picked Samsung Electronics, Lotte Chemical and Hana Financial Group as likely to gain ground in 2014.

IT-related shares are major stock items that are sensitive to changes in the economy. IT devices also are frequently bought during the year-end shopping season in the United States. 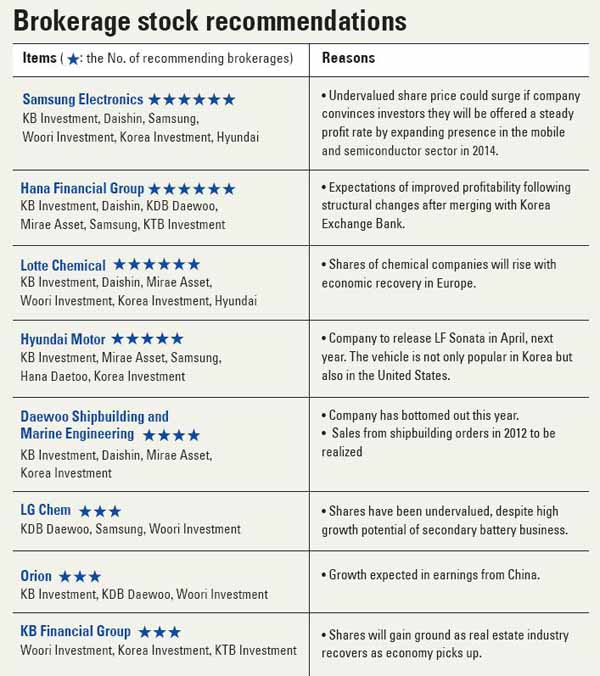 One thing brokerage firms are concerned about with IT companies is that industry competition is expected to be fierce with late-runners entering the market and launching their own smartphone devices. Share prices of Samsung Electronics plunged this summer because of enhanced competition in the market and slowing growth in the smartphone market.

Analysts, however, note that Samsung Electronics is still attractive.

In the third quarter this year, the company posted record earnings. Analysts have said that although the growth slowdown in the global smartphone market is an unfavorable factor, it is favorable for a company like Samsung that product life cycles have shortened with increased competition. Brokerage firms in their outlooks noted that the company has differentiated itself through its brand, product portfolio, cost competitiveness and marketing. Also, Samsung shares are preferred mainly by foreign investors.

Apart from Samsung Electronics, Hyundai Motor shares were recommended by five out of the 10 securities firms. When sentiment improves with recovery in the overall economy, consumers tend to look for new cars.

On top of that, analysts note that Hyundai Motor is favored because of its plans to release its new Sonata model in April.

“When we look at when Hyundai Motor released its new Sonata models three times since 1998, in the six months leading to its release, profit from Hyundai Motor shares exceeded that of the average Kospi,” said Seo Sung-moon of Korea Investment and Securities. Seo, however, noted that one variable would be the strengthening of the won.

Brokerages also selected Lotte Chemical as a company that will gain ground next year. Expectations for chemical shares are high as there are hopes the European economy will improve, and Europe accounts for a third of the world’s chemical production. Securities companies forecast that growth in Europe’s chemical industry along with an improving economy are factors that will be favorable to local chemical shares.

Analysts note that Lotte Chemical has a diversified product portfolio, including synthetic resins, textiles and rubber, which makes it more competitive in the global market.

“LG Chem is the world’s No. 1 company in the electric vehicle battery market,” said Kim Seung-woo of Samsung Securities. “The company will definitely benefit from growth in the industry.”

When the economy picks up, household and corporate loans also increase. This is why brokerage firms also picked financial shares like Hana Financial Group.

Daewoo Shipbuilding and Marine Engineering also was chosen as likely to see an increase in profitability in 2014. Recently, Maersk Line, the world’s largest shipping company, gave an outlook that by 2015, demand for global container freight will increase from 4 percent to 6 percent.