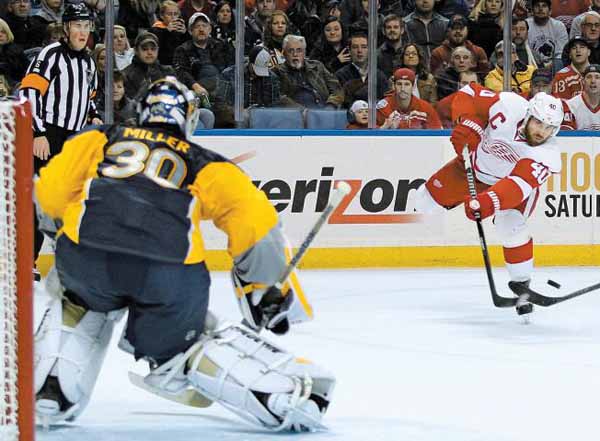 The Detroit Red Wings put Jonas Gustavsson in a tough spot, and the backup goaltender bailed them out. Gustavsson made 21 saves, including a stop on Steve Ott’s penalty shot, and the Red Wings sent the Buffalo Sabres to their fourth straight loss, 3-1, on Sunday.

Tied at 1 with 9:39 gone in the second period, Niklas Kronwall hooked Ott on a breakaway and Buffalo was awarded a penalty shot.

The Sabres captain went left, and Gustavsson stayed with him.

“I didn’t actually think he was going to go that way because that’s the way he went when he had the first opportunity, but he did,” Gustavsson said. “I tried to be patient and follow him and lucky enough, he didn’t score.”

Johan Franzen, Daniel Alfredsson and Darren Helm scored for the Red Wings. Henrik Zetterberg had an assist for his 700th career point.

The Red Wings were playing their third game in four nights but appeared the fresher team against the struggling Sabres.

“We decided to play a really solid game tonight,” Franzen said. “We talked about being patient, not giving up too many chances for the other team. I think we stuck to the plan pretty good and finally managed to get the win.”

Gustavsson was a difference maker, with several key stops on Buffalo’s two third-period power plays, including a save on Drew Stafford’s between-the-legs effort.

“He’s a gamer,” Franzen said. “He battles like crazy out there. He can really play the puck and read the play so we’ve got a lot of confidence in him.”

Ryan Miller made 32 saves for the Sabres. He is 2-8-2 against Detroit in his career.

“We can’t just get by and feel like 1-1 is good,” he said. “We have to go for it at home, especially with a team playing three in four nights.”

The Sabres took a 1-0 lead 11:58 into the game on a highlight-reel goal from Hodgson. Stafford intercepted a clearing attempt and passed in the slot to Hodgson, who forced Gustavsson out of the crease and then, with his body behind the goal line, used his backhand to tuck the puck into the net.

Detroit controlled play for most of the first period, but Miller made 14 saves, including a left pad save on Joakim Andersson in the closing seconds, to maintain the Sabres’ lead.

The go-ahead goal came on a power play when Franzen’s shot deflected off Sabres defenseman Alexander Sulzer and past Miller. Zetterberg assisted on the tally and improved his point total to 28, good for second in the NHL.

It was the sixth game pitting Ryan Miller against his younger brother, Drew, who is 5-1 against his older sibling.