These Pachyrhinosaurus babies may look cute, but an adult could reach 8 meters (26 feet) long. Provided by 20th Century Fox Korea

When you tackle a subject like dinosaurs, the odds are definitely not in your favor.

Foremost, you have the classic “Jurassic Park” from 20 years ago to contend with, remastered and re-released this year. But you also have the matter of science - paleontologists are forever discovering new species and new information, often overturning what they used to believe.

So when the producers of “Walking With Dinosaurs 3D” started to work on this movie, they knew they had to consult with a lot of people. In the end, the part-fiction, part-documentary project, which stemmed from the BBC’s 1999 hit series, was a joint effort that got the approval of the animators, the production team and scientists, too.

The distributor, 20th Century Fox, is marketing the film as “edutainment” for its ability to combine facts with an engrossing story, especially for young viewers, in the form of Patchi, a cute Pachyrhinosaurus. Patchi is voiced by Justin Long in the English version and by actor Lee Kwang-soo in the Korean version (both versions will be released locally). 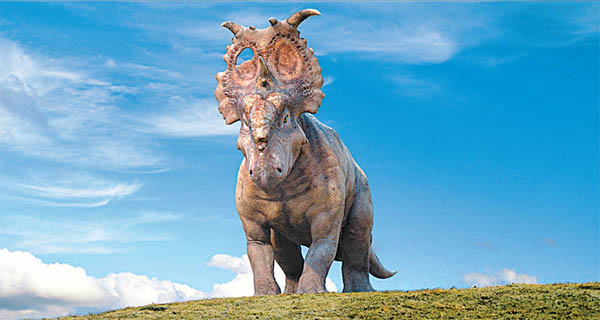 “Patchi is the runt of the litter who grows up to become a leader,” said Lee at a press conference on Wednesday.

He added that voicing Patchi was hard, “because he is constantly falling over, tumbling, and so I had to make some odd noises.”

But it wasn’t just Lee who had a difficult time on the project. The animators, Australia-based Animal Logic, spent four years developing the appropriate computer graphics, an unusual combination of real scenery and CGI they called “fusion 3-D.”

One big challenge was bringing emotions to these extinct creatures.

“Dinosaurs don’t have [many] facial muscles,” explained the film’s director Neil Nightingale through a Fox promotional video. “So the animators had to work on using different body parts to express emotions, like by eyes dilating, the movement of the tail, body and noises they make.”

The CGI company behind such works as “Happy Feet,” Animal Logic said the skin was the hardest part to perfect. The constant movement of the skin as these creatures breathe in and out is just one sign of the amazing level of detail the producers insisted on, creating “the point of difference to ‘Jurassic Park.’”

In the promotional video, lighting animator Lee Jung-hoon, a Korean national, said that they were hoping to set a new standard for dinosaurs, much as “Jurassic Park” did 20 years ago.

One crucial factor in the production was dealing with constantly advancing theories about those ancient creatures.

Korean dinosaur expert professor Heo Min of Chonnam National University’s Korea Dinosaur Research Center said that for the most part, the film was true to science.

“Since 20 years ago [when ‘Jurassic Park’ was released], more than a thousand new species have been found,” said Heo at the press conference.

He also said the film got his approval by incorporating a crucial paradigm shift in understanding dinosaurs.

“People think that dinosaurs are extinct, but that’s not true,” he said. “They are still around us. They’ve just evolved into birds.”

Heo added that, although not portrayed that way in the film, Patchi the main character could actually have been feathered.

“Because it was found that Triceratops had feathers, it is probable, although not 100 percent, that Pachyrhinosaurus, a distant cousin of the horned herbivore, had feathers, too. But the discovery was made after they started production,” Heo said.

“I expect that this film will spark a renewed interest in dinosaurs among the public, like ‘Jurassic Park’ did.”