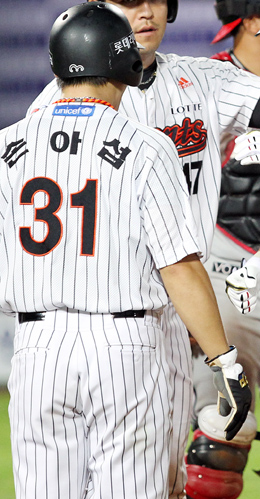 Changing one’s first name used to be hard in Korea, and people who really didn’t like their names mostly had to live with it. Examples of unpopular names include “Pi Ba-da,” meaning pool of blood, “Joo Sa-we,” meaning dice, and “Baek Kim-chi,” meaning white kimchi.

Son Ah-seop, right fielder of the Lotte Giants, was previously Son Gwang-min. He was a star player in high school, but didn’t stand out among his Giants’ teammates. In 2009, he decided to change his first name to Ah-seop, meaning “the best above ground.” After making the change, he has hit above .300 for four straight seasons since 2010 and won two gold gloves.

It seems other players have been inspired by Son. According to the Korea Baseball Organization, eight players changed their first names during the 2013 season. Kim Min-sik, 22, who recently joined the KBO’s 10th team, the KT Wiz, through the second-round draft, changed his first name to Ju-won, and Giants outfielder Hwang Sung-yong, 30, changed his first name to Dong-chae. The KBO said three players from the Kia Tigers, two players from the Nexen Heroes, and one each from the NC Dinos and SK Wyverns changed their first name in the past season.

“The number could increase later because the teams have not finished finalizing their 40-man rosters after the hot stove season,” a spokesman of the KBO told the Korea JoongAng Daily. “I think many players who might have changed their names are still registered with the KBO with their old names.”

Only one player changed his first name in the 2008 and 2009 seasons, but four players changed their first names in 2010, three players in 2011 and five in 2012. Pitcher Kim Sang-hyun of the Kia Tigers changed his name to Tae-young and infielder Jang Min-suk, who was traded to the Doosan Bears from the Nexen Heroes last week, was previously named Jang Ki-young.

“Tae-young means be glorious greatly,” Kim said. “I hope my future is just like what my name means.”

Some players in Major League Baseball have changed their names, but not for the same reasons as KBO players. Tampa Bay Rays pitcher Roberto Hernandez, who was previously known as Fausto Carmona, had to keep his present name after getting caught for illegally changing his name and age to join MLB. Many players in South America use fake names and ages to join MLB at a younger age.

“It is hard to find players changing their names during a season in the MLB,” analyst Song Jae-woo said. “I have seen some of them do that during the offseason for religious reasons.”