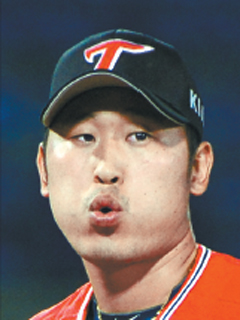 Yoon Suk-min, the ace pitcher of the Korea Baseball Organization, has been looking for a new home in Major League Baseball for a month. There were bidders and his agent, Jeon Seung-hwan of the Boras Corporation, has been telling Korean media that he is negotiating with four or five MLB teams regarding Yoon’s contract.

Local U.S. media said last month that the Minnesota Twins are a potential bidder for the 28-year-old right-hander, along with the New York Yankees and Chicago Cubs, but it seems like Yoon has fallen off the Twins’ radar. The Twins, a midsize ball club in the American League’s Central Division, signed a three-year, $24 million deal with free agent Phil Hughes on Sunday. The 26-year-old right-hander had 56 wins and 50 losses, and averaged a 4.54 ERA with the Yankees in his last seven seasons.

On Nov. 28, the Twins also signed a four-year, $49 million deal with free agent Ricky Nolasco, who was a teammate of Ryu Hyun-jin of the Los Angeles Dodgers this past season.

The Twins have been looking for some decent starters. They have lost at least 96 games in the last three seasons, mostly because of their starting pitching. Last year, their starters had an MLB-worst ERA of 5.26. That may be good news for the club but not for Yoon. The Twins had consistently showed their interest in Yoon. Scouts and Mike Radcliff, the Twins’ vice president for player personnel, watched Yoon pitch in Korea, including a game against the SK Wyverns on Sept. 10. The Detroit Tigers and Baltimore Orioles sent their scouts to see Yoon during the season, but the Twins were the only club to send a high-ranking official to Korea.

Considering the club’s payroll, which was 21st in the league this past season, the club seemed suitable for Yoon, who has no MLB experience but would have been available at a relatively low price. But it seems like Yoon isn’t the Twins’ first target because ESPN reported yesterday that the club is eyeing veteran free agent Bronson Arroyo, 35.

“I think the deadline for Yoon is the winter meetings,” analyst Song Jae-woo said. The MLB’s winter meetings end on Dec. 13. “If he still can’t sign a contract with a team by Dec. 15, it means that he really is in trouble. But Yoon is young and has many experiences, not only as a starting pitcher but also as a reliever. And because there is a possibility that Yoon would make a jackpot compared to his salary, I think many teams would make an offer in the week of the winter meetings.”

Some local media reported that the Cubs, who were interested in Hughes, may bid for Yoon. The Cubs traded their ace Matt Garza last season and may re-sign Jeff Samardzija. The Cubs’ team ERA last season was 3.97.