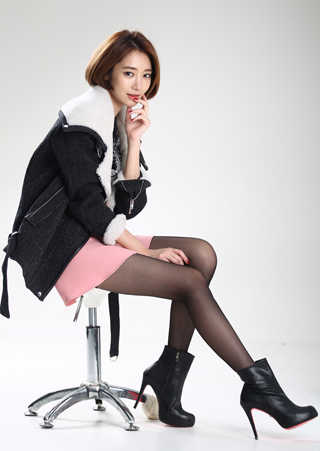 Ko Joon-hee, an actress with a 12-year career, has been stepping into the spotlight since last year after she took part in the SBS dramas “The Chaser” and “The King of Ambition.”

In addition to expanding her presence on reality shows like “We Got Married” on MBC, she has also garnered a new nickname, “Fashionistar,” after viewers kept focusing on the clothes, accessories and hairstyles she wore on the show.

Ko earned the chance to play the lead in movies and stars in “Marriage Blue,” which hit local theaters last month. She also recently completed filming for another movie, “Red Carpet,” in which actor Yoon Kye-sang is her counterpart.

Ko said she was happy working on “Marriage Blue” as the movie depicts the choices made by couples one week before their weddings.

“I like the fact that the movie has a delightful vibe, although not all the couples featured in the movie have a happy ending,” she said in a recent interview with Ilgan Sports, an affiliate of the Korea JoongAng Daily.

Q. How did you know how to portray the feelings of people who are about to get married when you haven’t been married yourself?

A. I have heard and seen people around me. Those vicarious experiences really helped me with my acting.

Do you feel that you are more popular these days?

I get embarrassed as many say I’m one of the most popular ones these days. Most of my fans used to be women in their early or mid-20s, but I definitely have fans from a wider age range now. The president of the production company that made “Marriage Blue” also advised me to take the most advantages when I’m reaching my highs.

But haven’t you pushed yourself too much without taking a break?

“This year, I really have not taken any proper break. I almost wanted to cry while I have some arrangements overseas. I have complained to my manager often as well. But no matter how hard it is physically, I feel delightful. And I work in a cheerful manner even when I say I’m overwhelmed. I think later in the future, the fact that I had worked so hard will remain as a good memory.

What do you think about having been recognized as a “fashionistar?”

I’m very thankful for such a nickname. I’m really surprised to hear that clothing I wore sells well. I didn’t mean to spread my hairstyle, but was thankful to see that people search online for “Ko Joon-hee’s hairstyle.” I’m not being arrogant but the whole situation seems very surreal to me.

How do you shop?

Many would have thought differently, but I don’t go shopping often. And I don’t prefer luxurious items, either. But I do buy in bulk when I find something I like when I do go shopping. Because it is hard for me to find something that really fits well on my body, when I click with something, I buy the same things in different colors.