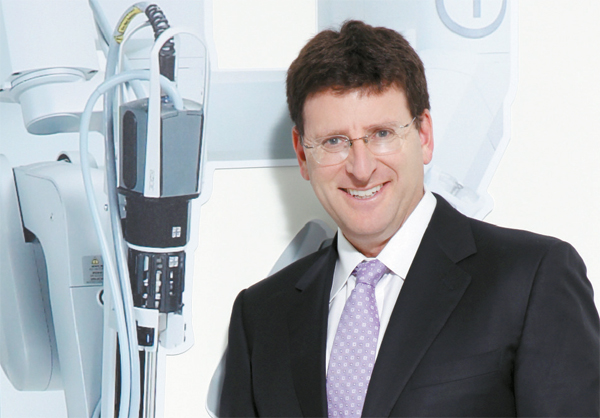 Gary Guthart, CEO of Intuitive Surgical, an American medical business famous for creating the world’s first robotic surgical system, has a favorite quote from the late Steve Jobs: “We live at the intersection of humanity and technology.”

Guthart, who majored in physics, has drawn inspiration from IT giants like Apple, Google and some Korean businesses to make his company the Apple of the medical world.

He introduced his company by saying, “We live at the intersection of surgery and high technology.

“Apple was willing to do something new, and their idea was to deliver technology to change people’s behaviors. Likewise, we use robotic technology to do surgery and think about how we use technology to make surgery better,” Guthart said in an interview with the Korea JoongAng Daily last month. He visited Seoul to speak at the Korea Healthcare Congress.

“For start-ups, failure is normal and it doesn’t ruin your career,” he said. “Even in Silicon Valley, one out of 50 start-ups has survived after five years. There are so many disrupted companies in Silicon Valley, which is unusual compared to other places, because people are willing to try, even if it’s hard,” he said. “Risk-taking is accepted there.”

Intuitive Surgical is based in Sunnyvale, California, adjacent to Cupertino where Apple has its headquarters, and had $2 billion in sales last year. The company invented the da Vinci robot surgery system that gives surgeons access to small organs in difficult-to-reach parts of the human body. The robot can perform complex operations to treat prostate, uterine and cervical cancer and heart disease.

It is a sophisticated robotic platform designed to expand the surgeon’s capabilities and offer a state-of-the-art minimally invasive option for major operations.

With da Vinci, small incisions are used to insert miniature instruments that simulate the human wrist and a high-definition 3-D camera. Seated comfortably at the da Vinci console, a surgeon views a magnified, high-resolution 3-D image of the surgical site inside the body.

At the same time, the latest robotic and computer technologies scale, filter and seamlessly translate the surgeon’s hand movements into precise micro-movements of da Vinci instruments.

It was built using a remote control technology initially used by the defense industry in the late 1980s in a program made under the U.S. State Department. The idea to create the robot was also for treating injured soldiers at war sites that are difficult and dangerous for doctors to reach.

Stanford Research Institute (SRI) was working on the program under a U.S. Army contract. Later, NASA, IBM and Intuitive Surgical joined the program and changed the focus slightly from being controlled remotely to more sophisticated surgery for commercial use.

Intuitive Surgical was founded by three colleagues with expertise in engineering, science and finance in 1996, and its first da Vinci System launched three years later.

In 2000, it became the first robotic surgical system cleared by the FDA for general laparoscopic surgery. Guthart, who was working at SRI, was asked by the founders to join the company in its early stage as one of its 11 engineers.

“To develop as many as 1,000 components in the first three years, we worked day and night in a very small office. We came before the sun was up, worked until dinner time, went home to say hello to the kids and came back to work until midnight,” he recalled. “We had problems multiple times, and had to break down everything and set up again. Technical failures were more common than success. They happened routinely.”

“Risk comes in three flavors - chocolate, vanilla and strawberry,” he said. “The first is technical risk. You are not sure in the early days, you just have to try something out. The second is that your idea is not clear, because you are doing something nobody has ever done before. The last risk is economics. Can you make it at a cost that makes sense for your customers? Nobody is sure when they start. One huge mistake is seeing something ugly and deciding to stop before it is finished.

“We took the risks after seeing an unbelievable, frightening heart procedure that cut the patient’s chest with a saw and used regular wires and thought, ‘We can do better than this.’

“Around the world now, every health care system is struggling with the same concerns. No.1 is everyone wants to create the best outcomes for patients. In the case of surgery, there is a lot of room for innovation. Surgery is still a sophisticated, complicated experience and there are opportunities involving how do we make it better for patients.”

The next concern is how to take new technology, how to combine innovation and technology and how to bring a product into hospitals safely, he continued.

The last is the economics that deal with how insurance payers and governments make decisions about using new technologies.

Due to gradually increasing demand for robotic surgery in Korea, the Silicon Valley-based corporation set up a branch in Seoul in order to be closer to Korean patients.

“Korea is an important place for Intuitive to be in the region because Korean surgeons and Korean medical system are ahead of the world in many places in terms of surgical technical development and innovation in surgery,” said Guthart.

Intuitive sold the first robot system to Korea in 2005. Yonsei University Hospital completed its 10,000th surgery with da Vinci on Nov. 11, “which is the highest experience of any single institution in the world,” he added.

“There are bigger population centers in Asia. So our motivation has been not because the Korean market is so big, but it’s the leadership position of the country. And the leadership comes from surgeons’ deep commitment to patient outcomes.”