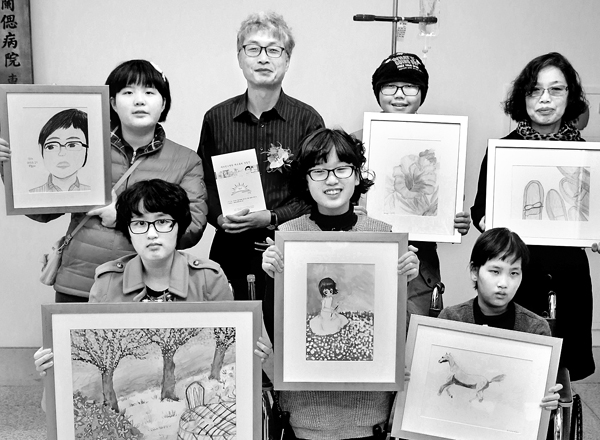 When Lee Yae-na first heard the diagnosis - leukemia - she felt her world crashing down around her.

But the 11-year-old managed to pull herself together, finding hope in an unexpected place.

Armed with a brush, she started to paint, and it provided the release she so desperately needed. Creating art kept her mind off reality, and ultimately instilled in her the faith that she would someday have a normal life again.

One of her paintings - a physical representation of her will to carry on - now hangs in the chapel at Severance Hospital in Sinchon, northwestern Seoul. It is part of an exhibition hosted by Haeohleum, the hospital’s youth art club, which runs until today.

The year-old club has five members, including Lee, and is supervised by professional artist Choi Jong-jin, 55. Haeohleum, which means “rising sun,” is indicative of the club’s founding purpose - “to hope for a brighter future and set out in a world full of light.”

“The title of my painting is ‘Girl: Faith,’?” Lee said triumphantly. “It shows my will to overcome leukemia.”

The exhibition displays the creations of its five teenage patients, most of whom have been undergoing cancer treatment for as many as five years.

Under the guidance of Choi and hospital counselor Park Yeon-jeong, the group has been creating portraits and landscapes for two hours once a week since last August.

Choi’s younger brother - a doctor in Severance Hospital’s dentistry department - recommended him for the job. “I may have started off as a teacher,” Choi said, “but now, seeing these wonderful kids come alive in class, I feel like I’m the one learning.”

Choi has since broadened his art class to include patients suffering from pediatric blood tumors and holds lessons three times a week.

“Not only do [the kids] have fun,” he said, “but they learn the pure essence of love, sharing and worship.”

For the exhibition, Park Chae-ryon, 12, submitted a horse sketch. In it, the animal, full of grandeur, dashes through the green plains, and the wind rushes through its golden mane.

A brochure, distributed at the entrance, reads: “The horse can run anywhere. I am envious. I used to be a fast runner; I hate myself for having ended up this way. But they say dreams come true.”

Severance Hospital announced it had appointed the Haeohleum members as “amateur artists” on Dec. 9, in an effort to further encourage the club members and raise more awareness about the group.

“A lot of people have dropped by the exhibition,” said Jeong Hyun-jin, of the hospital’s public relations team. “Someone even secretly left a rose on one of the paintings.”