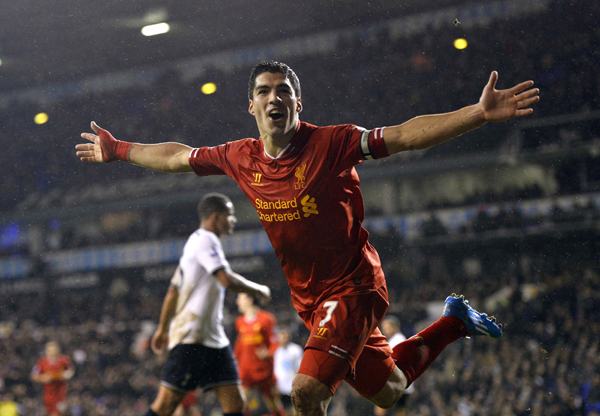 Liverpool’s Luis Suarez celebrates after scoring a goal against Tottenham Hotspur at White Hart Lane in London on Sunday. [Reuters/NEWS1]

Irrepressible Luis Suarez scored twice in Liverpool’s 5-0 rout of 10-man Tottenham Hotspur on Sunday that suggested the former aristocrats of English football may have the pizzazz and swagger to end their long wait for a league title.

Champion Manchester United ended its poor run of results with a comfortable 3-0 win at Aston Villa, but it was Suarez who made all the headlines.

Reveling in the role of captain in Steven Gerrard’s absence through injury, the Uruguayan produced another virtuoso display which put Liverpool above Chelsea into second place on goal difference, two points behind leader Arsenal, which have 35 from 16 games.

Suarez began the season late after serving the end of a ban, but the striker has made up for lost time - his 16th and 17th Premier League goals are more than the Spurs and nine other top-flight teams have managed.

“It was a brilliant all-round performance. The players worked tirelessly. The level of football was superb,” said Liverpool manager Brendan Rodgers. “We got five goals and arguably we could have had seven or eight. That’s the beauty of team, it has goals in it.

“We spoke before the game that we were missing outstanding players in Steven Gerrard and Daniel Sturridge, but I said winning teams support each other. We’ve shown it’s the team that is most important for us.”

Liverpool has not been crowned champion since 1990 and trips to Manchester City and Chelsea this month could go a long way to revealing whether the Anfield club has the stamina and class for a sustained title challenge.

Suarez, flourishing without injured partner Sturridge alongside him, netted an 18th-minute opener with a precise finish into the bottom corner.

Philippe Coutinho struck the bar, but Jordan Henderson added a second goal five minutes before halftime after Hugo Lloris had palmed away a Suarez shot.

The Spurs then capitulated to their worst home defeat in 16 years, after Brazil international Paulinho was shown a straight red card for catching Suarez in the chest with a high foot.

Suarez crossed for young defender Jon Flanagan to net his first Liverpool goal, then lifted the ball over an outrushing Lloris to score the fourth and provided the cross for Raheem Sterling to ice the cake with a late fifth.

Spurs remained in seventh place and manager Andre Villas-Boas shrugged when questioned about whether his job was safe.

England striker Danny Welbeck made the most of a rare start for Manchester United with a first-half double at Villa as the champions ended a run of four Premier League games without a victory.

Welbeck, recalled in place of the injured Robin van Persie, struck twice in three minutes for United, who moved up one spot to eighth, 10 points behind Arsenal.

United had suffered successive home defeats by Everton and Newcastle United, which followed draws at Cardiff City and Tottenham, but they outclassed the hosts and made the game safe when Tom Cleverley struck in the 52nd minute.

“It was a good job from us. The players did well, and the only thing I would criticize is that we didn’t score more goals,” United manager David Moyes told Sky Sports.

“We were a bit sloppy in the first five minutes, but after that played really well.”

United received another boost when Scotland international midfielder Darren Fletcher, battling a chronic bowel condition, came off the bench for his first appearance in nearly a year.