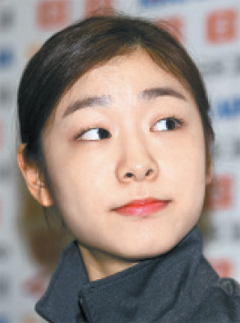 Since figure skating queen Kim Yu-na announced that she will participate in the 68th national All-Round Championship that begins on Jan. 3 in Goyang, northern Gyeonggi, fans who want to see the 23-year-old’s final domestic event have begun a war to reserve tickets. The Korea Skating Union confirmed that Kim submitted an application on Monday to participate in the event.

The event previously had a hard time attracting fans because of a lack of star athletes in winter sports, but it started to draw more attention in January, when Kim competed in the 67th championship that was held in Mok-dong, western Seoul. Kim skated in the event in preparation for the International Skating Union’s Figure Skating World Championship in Canada, in which she participated in March. It was her first domestic championship appearance in six years, and the ice rink in Mok-dong was packed to capacity.

For that event, the Korea Skating Union sold 3,600 tickets via the Internet, which was the first time the union sold tickets online, and they sold out in only 10 minutes. After fans who were unable to buy tickets complained to the union, it provided an additional 1,200 standing-room tickets, which sold out within five minutes. On the day of the event, scalpers sold some tickets near the ice rink.

It looks like the ice rink in Goyang will likely have a situation similar to the January event, not only because of Kim’s participation, but because it is her final competition in Korea.

The skating union hasn’t started selling tickets yet, but they have been busy receiving calls from fans willing to buy them.

“After news about Kim’s participation in the Goyang event was released via media outlets, we weren’t able to do our work as we received tons of phone calls asking for ticket reservations,” said Park Jong-myung, secretary general of the skating union.

The ice rink in Goyang hosted ISU’s Grand Prix of Figure Skating in December 2008, in which the world’s two biggest rivals in figure skating, Kim and Japan’s Mao Asada, competed. The rink only had 2,450 seats at the time. After receiving many complaints about the facility from fans, the union installed an additional 1,000 seats at a cost of 200 million won ($190,000).

“The ticket reservations will likely begin as early as next week,” Park said. “We are discussing the issue with the event’s official sponsor, Kookmin Bank. We are not considering installing additional seats.”

Kim is preparing for the Sochi Winter Olympics, which begin in February, in the same way she did when she prepared for the championship in Canada. Kim skated in the All-Round Championship in January and scored 210.77 points. About two months later she won the ISU World Championship in Canada with a score of 218.31 points, the second-highest score in the history of women’s singles figure skating.