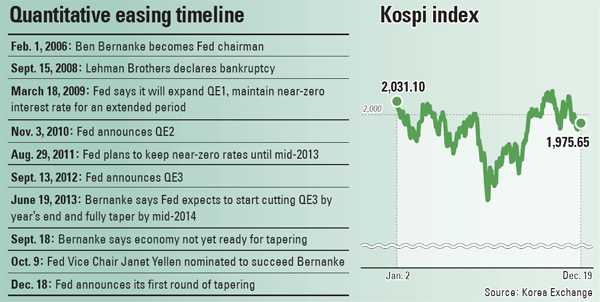 Stock markets across the globe including the Seoul main bourse responded positively yesterday to the U.S. Federal Reserve’s first step toward normalizing its monetary policy, a reaction that experts attributed to the end of uncertainty that haunted investors for more than half a year.

Overnight, the Fed decided to reduce its monthly bond-buying program from $85 billion to $75 billion starting in January, signaling the beginning of the end of a stimulus program established to push the U.S. economy out of one of its worst recessions in recent years.

“Reflecting cumulative progress and an improved outlook for the job market, the committee decided today to modestly reduce the monthly pace at which it is adding to the longer-term securities on its balance sheet,” outgoing Fed Chairman Ben Bernanke said after the ending of the two-day Federal Open Market Committee meeting in Washington.

The meeting was the last for Bernanke, whose tenure of eight years ends next month.

Although the Fed will be winding down its asset-buying program, the chairman said the central bank will continue to keep its benchmark rate low, which is near zero percent, even after its unemployment rate falls below 6.5 percent, to cushion market reaction. He said rates will remain low if projected inflation continues to run below the Fed’s 2 percent target, which some market experts see as lasting until the end of 2015 or even 2017.

Some experts see the moves as a powerful forward guidance that serves two purposes: sustaining historically low interest rates while continuing to support the recovery.

After the announcement, the Korean primary market advanced before slowing in the afternoon to close 0.05 percent higher than the previous day at 1,975.65.

Other markets advanced as well. In the United States, the Dow Jones average moved up 1.8 percent, while the Japanese primary market increased 1.7 percent.

“The tapering that has haunted [investors] notoriously is now accepted as good news that reflects confidence in an economic recovery,” said Chae Hyun-ki, an economist at KTB Investment and Securities.

“The impact the taper might have on foreign exchange, interest rates and the stock market will not be large, especially since the market has long been focused more on when the trimming of asset buying would start and how the Fed looked at the economy,” he added.

Like the KTB Investment and Securities economist, industry experts say markets have been preparing for a reduction in asset buying.

For that reason, markets didn’t respond as they did in May when the issue first surfaced and markets around the world, particularly in emerging economies like India and Indonesia, panicked. 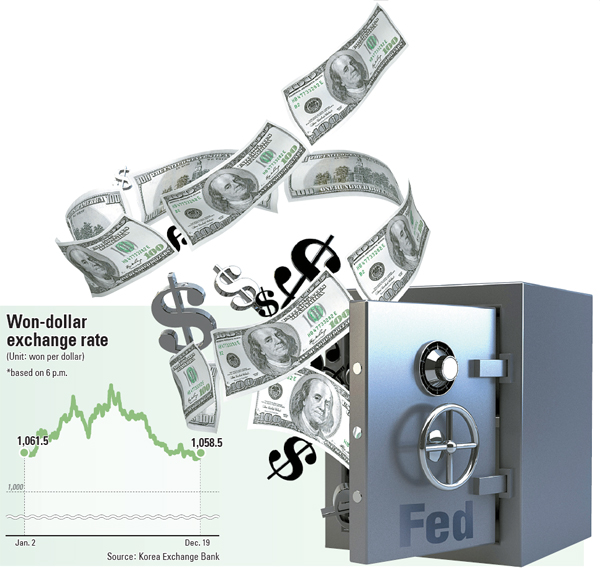 Global markets have further realized the end of the unprecedented quantitative easing was near when the issue came up again in September. Market experts say investors already had enough time to prepare for the cutback.

Earlier, some experts projected the U.S. central bank would start curtailing its bond-buying program as late as March. However, many projected the Fed would start cutting back by $10 billion to $12 billion a month as a start. That projection hit the mark, which also reduced any acute reaction that may have come from the financial markets.

Many say the impact of the tapering on the Korean market will be limited. Instead, it has cleared any uncertainties that remain over the issue while raising hopes on the continuing recovery of the economy of the United States and other developed countries.

“It is clear the Fed’s decision is based on the recent improvement in the U.S. economy,” said Oh Dong-seok, a fixed income and FX analyst at E-Trade.

Although the local market didn’t sputter as it did earlier this year and the tapering is considered good news, there are still factors that could cause improving investor sentiment to do an about-face.

One of such risk factors is a sudden change in emerging markets. As proven earlier this year, even the mention of an end to the stimulus program led to a huge exodus of investors from emerging markets. Some experts worry that a sudden pullout of investors in such economies also could have a negative impact on Korea, especially in regard to exports. Korea’s exports to Southeast Asia and other emerging countries have been dwindling in recent months.

Another concern is a possible rise in interest rates when additional trimming of quantitative easing occurs. This is expected to have a particularly significant on companies and households that have large amounts of debt.

“Currently, total debt [including household and government] is roughly 3,000 trillion won,” said Oh of E-Trade. “If interest rates rise even 1 percent next year, that would create an additional 25 trillion won of debt burden. This could affect consumer spending and investment.

Financial authorities have been monitoring the situation closely and concluded that the impact from the tapering decision was limited and the local market was stable.

The Bank of Korea yesterday said it has reinstituted a 24-hour special emergency team that will monitor the situation.