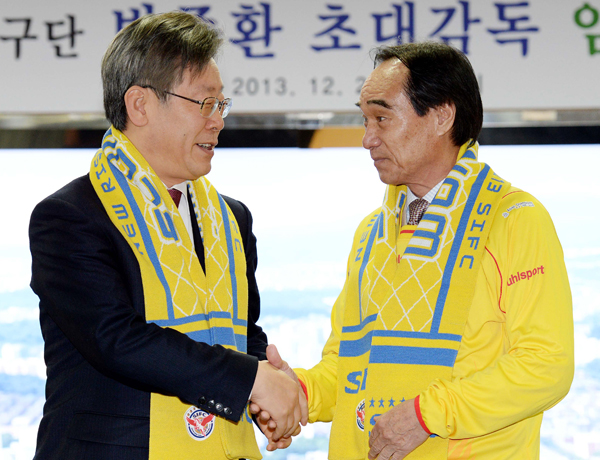 Seventy-five-year-old Park Jong-hwan has returned to the K-League Classic, for the first time since he left Korean football in 2006, to become coach of the citizens-funded club Seongnam FC.

Seongnam city government yesterday signed a three-year contract with Park. The club said it is still negotiating with Park about the details of the contract, including his salary, but Park agreed to manage the team no matter how much he receives.

Seongnam Ilhwa Chunma FC, the forerunner of Seongnam FC, was in danger of being dissolved due to the financial troubles of its operator, the Unification Church, but the municipal government said in October that it decided to take over the club to keep it in the city.

The club has had a hard time financing its operation since the Unification Church stopped supporting it after the death of its founder, the Rev. Moon Sun-myung, in September 2012.

The church shut down all of its sports businesses, including South Chungcheong Women’s Football Club and Sunmoon Peace Football Foundation, organizer of the Peace Cup Korea, an invitational preseason friendly football tournament for club teams that was held every two years. The church told the club to find a way to survive in the K-League on its own.

“We are very pleased to have Park, who has had an excellent career in Korean football,” Seongnam Mayor Lee Jae-myung said. “Park led the club’s forerunner for a long time. I think his knowledge and experience in football will definitely lead the team well.”

Park led the Korean national youth football team to the semifinals of the 1983 Mexico World Youth Championship with his strong charisma. He then led Seongnam Ilhwa Chunma FC from 1989-95 and won three consecutive K-League titles from 1993-95. He also won the Asia Club Championship, now the AFC Champions League, in 1995. The 2006 season with Daegu FC was his last in the league.

“I’m very happy to be coming back to the football field,” Park said. “I will re-demonstrate the club’s own style that was once so-called bees’ football, which is similar to the Netherlands’ ‘total soccer.’?”

Park is considered a living football legend in Korea. He led the national football team several times in the 1980s and 1990s and developed Korea’s football style, which emphasizes players’ fighting spirit, mental strength and ability to aggressively challenge opponents. He was also known as the most aggressive coach in the history of Korean football for his military style. In the 2000s, some said his style isn’t competitive anymore because his football is too old-school. Park has been a football coach for 41 years.

“I never imagined that I would be working as a coach again,” Park said. “I know that there are some people who wonder about me coaching this team because I have not been around football for six years, but I decided to manage this team because I know that I can do this. I will try to develop this club as the best team in the league.”

Park also said he can contribute to the league. “Many of the K-League teams are currently under the leadership of young coaches who are only in their early 40s,” Park said.

“People say I play old football, but when I see those young coaches leading teams, I don’t see many differences from the time I did. Players’ personal football skills have improved in recent years, but some of the young players who lack experience in football are misleading those young prospects. They certainly need to wake up to show a professional-level football to fans. I think a return of an old coach like me will be a good wake-up call for those young leaders who certainly need to study football more.”