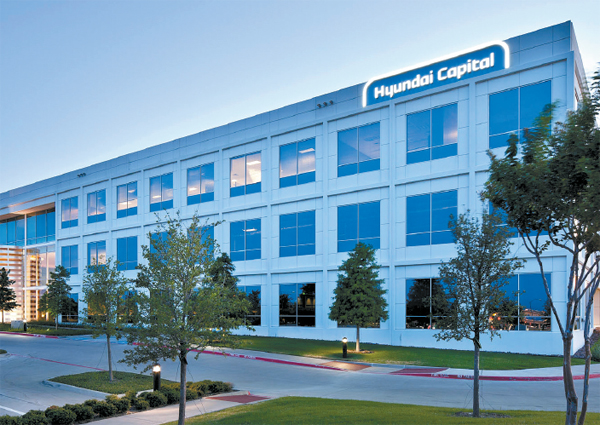 The Financial Services Commission recently set a goal for Korea’s financial industry: increase the value added by the financial sector to the country’s gross domestic product from the current 7 percent up to 10 percent within the next decade.

Promoting the overseas expansion of financial institutions is one of the main pillars of the goal, and Hyundai Capital America has been rather successful in this regard.

Hyundai Capital America is the U.S. affiliate of Hyundai Capital, the financial arm of Hyundai Motor Group. The company facilitates the sale of Hyundai and Kia automobiles in the United States by specializing in auto finance. It provides installment plans and auto leases for customers and inventory financing for dealers.

Kia Motors Finance, an affiliate of Hyundai, ranked first in the mass market, receiving 851 points out of 1,000 according to Hyundai. Hyundai Motor Finance ranked third with 848 points. The survey measures the consumer satisfaction level of car owners of up to 7 years for financial services they received. Other global auto financial companies such as Ford Credit, Toyota Financial Services and Honda Financial Services all lagged behind.

The result is a huge progress from last year, when Hyundai Motor Finance recorded sixth place. Kia Motors Finance was not included in the ranking at all.

Hyundai Capital said its key to success was seeking continuous innovation in its services. The U.S. branch significantly reduced the time it takes to review consumer’s credit information and deliver product conditions to around nine minutes, for example, which is 40 percent shorter than the average U.S. time of 15 minutes.

According to Hyundai Capital, applying successful domestic cases and transferring know-how to its U.S. company has also proved effective. The U.S. branch is now receiving in-depth consultation on product planning, risk management, operations, customer retention and so on.

“Hyundai Capital currently has branches in nine countries, including China, India, Brazil and Russia,” said a spokesperson for the company. “Achievements in the United States are just a beginning for ‘global Hyundai Capital.’?”