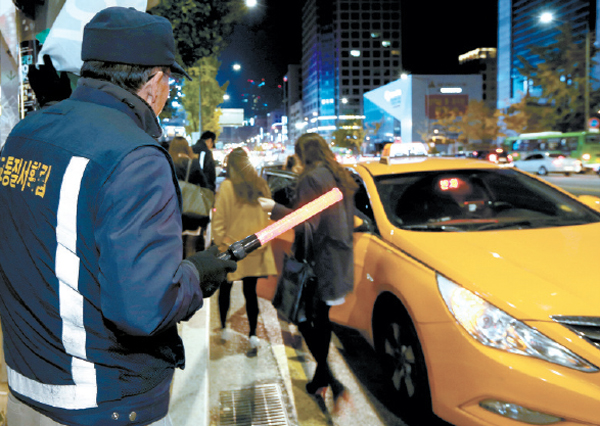 Authorities were on the lookout last month for cab drivers at Hongik University Station who refused service to passengers. Despite city government efforts and an increase in base taxi fare by 600 won (0.56 dollar), some drivers still deny service to some customers, opting instead to take passengers headed for distant destinations. By Kang Jung-hyun

Despite a recent 600 won ($0.56) increase in the flag fall for taxis in Seoul to 3,000 won, many passengers are still struggling to catch a cab. City residents have complained that some drivers only want to accept passengers headed for farther destinations or that they have been denied service altogether.

When the JoongAng Ilbo visited Hongik University Station on Friday night in western Seoul - when temperatures dropped well below zero degrees Celsius - several passengers could be seen hailing cabs but with little success. Some drivers, not satisfied with where some potential customers were headed, simply drove away.

Jung Hyun-soo, a 39-year-old worker, said he had spent the past 20 minutes trying to get a cab, only to be rejected every time. Some passengers were even forced to step out of the taxis after drivers refused to take them to their destinations.

A similar scene played out at 1 a.m. on Saturday near Jonggak Station in central Seoul.

Kim Hyun-ju, 25, who was trying to catch a cab home to Gwangjin District after attending a year-end party, said that she had been refused service by a number of taxi drivers.

One of the primary reasons the Seoul Metropolitan Government decided to raise the basic taxi rate three months ago - the first time in four years - was to prevent such behaviors by cab drivers. Refusing service is illegal, and violators are subject to a fine imposed by district offices.

Cab drivers in Seoul have cited low monthly wages - about 1.87 million won on average before the flag-fall increase - as one of the main reasons why they selectively choose passengers according to distance. The city government projected that the new fare structure would increase their average monthly salary by up to 240,000 won.

However, with drivers still denying customers taxi services, the city government’s initiative appears to have had little effect.

After investigating complaints filed with the Dasan Call Center (#120) in which passengers claimed that they had been denied transportation, a JoongAng Ilbo analysis revealed that district offices in Seoul imposed financial penalties in only 14.5 percent of the total cases. (Individual district offices in Seoul have full authority to determine the level of punishment for those alleged to have violated the taxi regulation code.)

Gangseo’s district office simply gave out warnings 92 percent of the time, or in 1,130 cases, and the complaints carried no financial penalties. And Gwangjin District in northern Seoul acquitted 338 cases out of the 430 complaints filed by passengers this year regarding drivers’ refusal to accept passengers.

Several district offices have spared drivers from paying fines. But these offices also tend to have one thing in common: The headquarters of these taxi companies are clustered in those districts, including in Gangseo, Dobong and Yangcheon.

The tendency for district office officials to overlook violations by cab drivers has led industry watchers to demand that the Seoul city government take on full authority in imposing punishments.

Park Yong-jin, a professor of transportation engineering at Keimyung University in Daegu, argued that putting sole responsibility on the Seoul city government to hand out financial penalties “in a consistent manner” would help solve prevalent issues in the taxi industry.

Some disgruntled passengers have even called for legislation that would suspend taxi company services for a certain period time if its drivers are caught refusing passengers. In Japan, for example, a taxi company is barred from operation for 30 days as a penalty for any wrongdoing.

A bill that details a suspension code for passenger rejection is currently pending at the National Assembly.