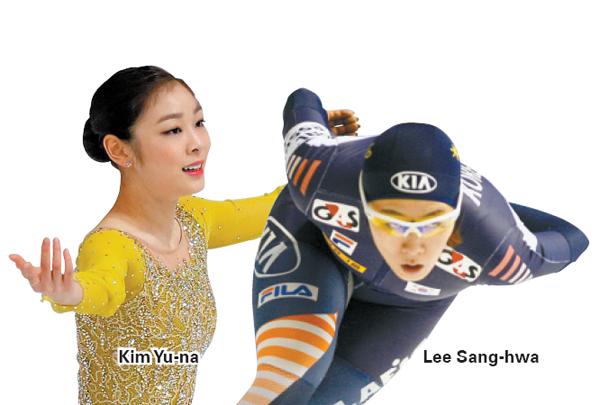 On the afternoon of New Year’s Day at Goyang Ice Rink in northern Gyeonggi, figure-skating queen Kim Yu-na practiced her programs for the 68th national All-Round Championship, which began yesterday. Kim will participate in the senior division of the event, which begins today. The event will be her last in Korea and her final rehearsal for the Sochi Winter Olympics in February.

Kim spent many hours practicing the jumps that she didn’t perform well during the Golden Spin of Zagreb, which she won in Croatia in December. She also worked on improving her spins as if she was in the middle of an Olympic competition.

“The reason I was able to win the ISU World Championship in Canada in 2013 was because I shaped myself up well in the all-round event,” Kim said. “I won’t say winning the gold medal in Sochi is my New Year’s resolution, but I’m doing my best to wrap up my career with a good result.”

“The most important thing is to focus on completing my own goals,” Kim said. “When I came back on the rink in 2012, I set a goal of wrapping up my career well rather than just winning medals. I’m not preparing for any special skills for Sochi because I don’t feel like they are necessary.

“I’m not feeling much pressure for the Olympics because I think I already have done many things in my career. I will try to enjoy my second Olympics.”

While the figure-skating queen is preparing a happy ending, speed skater Lee Sang-hwa, 25, is aiming for her second consecutive Olympic title in the women’s 500 meters next month in Sochi.

Analysts and fans consider Lee the most likely gold medal winner in Sochi because she had an excellent 2013 season.

“I want this year to be a great one,” she said. “I think the Sochi event would be a successful one for me if I acquire any medal, but my bar is higher than ever.”

Regarding her 2013 season, she said, “I never expected to set the world record that many times in one year. I think it was one of my most successful years in my entire career. I just want to bring this good mood to Sochi to make a good outcome.”

Lee said she is spending many hours cycling as part of her training.

“What I have been trying recently was developing my lower body to make it stronger to improve my speed on the rink, and I think cycling really helped me a lot to do that, though I often felt like I want to dump my bike into a dumpster because it was too hard.”

She said she had a really serious cold after November’s World Cup event, but she couldn’t take any medicine because of a drug test that she will have in Sochi.

“I’m still not 100 percent recovered, but I think I will be in good shape. I am also trying to be much stronger mentally as one of the biggest winter sports events is about two months ahead. I ask people to support me.”