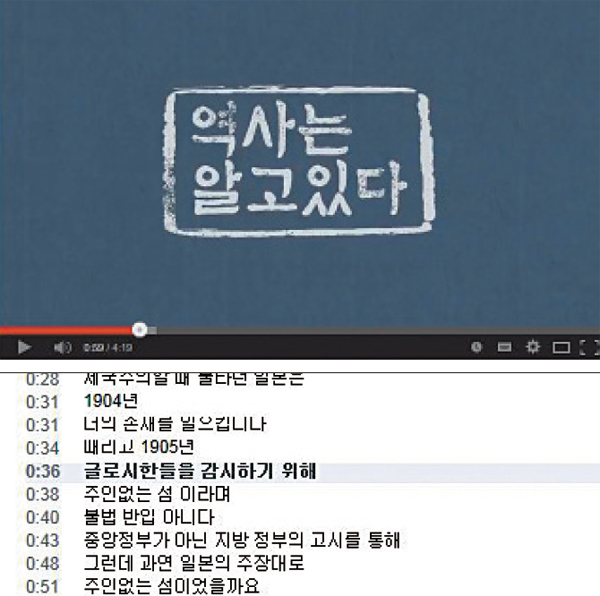 The subtitles of a government video asserting Korea’s claim to Dokdo provided by YouTube’s automatic caption service were unintelligible. [YouTube]

The Ministry of Foreign Affairs found itself in the hot seat after it was discovered that a YouTube video proclaiming Korea’s ownership of the Dokdo islets featured unintelligible Korean subtitles.

The Korean captions of the four-minute clip were provided by YouTube’s automatic subtitle service for the deaf.

Critics say the Foreign Ministry should have paid closer attention after posting the video on the first day of the year, especially as Japan is using social media to assert its claim to the islets.

In October, the Japanese Ministry of Foreign Affairs also posted a video online publicizing its claim, prompting Korea to call for its removal.

The first one minute of Seoul’s film contains the core message that Japan’s claim on Dokdo - which it calls Takeshima - began as part of its imperial aggression.

But the subtitles at the beginning include sentences that don’t make sense and vocabulary that doesn’t appear in dictionaries.

The later captions aren’t much better, including irrelevant sentences such as, “There is no first posting.”

“We didn’t know about the service,” said an official of the ministry who requested anonymity. “We’ll promptly take measures.”

The posted video is a summary of a 12-minute video that is still under development.

This is not the first time that the ministry has been accused of poor handling of the Dokdo campaign. In October, it posted the first version of the 12-minute video. Within 14 days, the ministry had to take it down due to unauthorized use of clips from Japan’s national broadcaster NHK.

After that mishap, the Foreign Ministry said it followed up with extensive research and discussions and invited high-ranking foreign service men for consultations, including Foreign Minister Yoon Byung-se.

The ministry said it plans a longer version of the Dokdo film in multiple languages, although it did not say when.