Luxury import CEO is a relentless student of life

Luxury import CEO is a relentless student of life 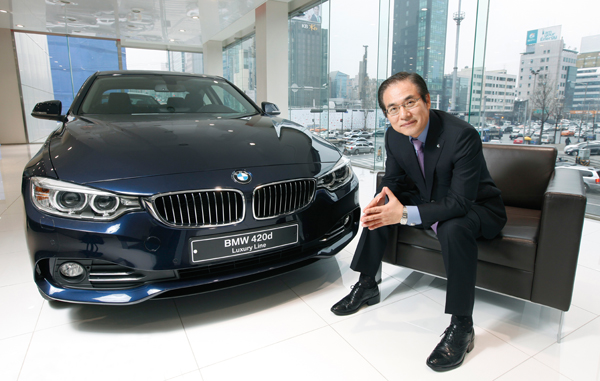 BMW Group Korea President and CEO Kim Hyo-joon pose next to a BMW 420d coupe at a dealership in Dosan-daero, Sinsa-dong, southern Seoul on Dec. 26, 2013. BMW was the first foreign auto brand to open a shop in Dosan-daero, which is now known as Korea’s Imported Car Boulevard. By Park Sang-moon

BMW Group Korea President Kim Hyo-joon is known as a CEO who is always studying. During the Christmas holidays, the 57-year-old spent time reading texts such as “Value-based Management” by Institute of Global Management Chairman Junn Sung-chull and books written by legendary Panasonic founder Konosuke Matsushita.

“I have read these books before, but it’s always good to reread them when I try to settle my mind,” Kim said.

From high school graduate CEO to first Asian senior executive of BMW Group, Kim’s reputation is well known. He has been introduced many times as a successful model for future entrepreneurs. Last year, Kim was appointed chief of the Korea Management Association’s CEO education committee.

Kim was interviewed at the BMW dealership in Dosan-daero, Sinsa-dong, southern Seoul, which is now referred to as Korea’s “Imported Car Boulevard.” BMW was the first foreign automaker to open a dealership on the street in 1995 and has been leading the imported car industry since then.

“I become emotional whenever I visit this place because it is the place that reminds me of many joys and sorrows in the past,” Kim said. “This is a place where you can see the history of trendy Gangnam, and many foreign brands have come here ? and departed ? after our success.”

Before entering the imported car business in 1995 as a financial director for BMW, Kim’s background had nothing to do with automobiles. But he applied himself to learning about the industry and became CEO of the Korean unit in 2000, which was the first time BMW Group had appointed a local to manage an overseas unit.

“I didn’t know much about automobiles, and while many people in BMW said they are selling premium products, no one talked about premium service,” he said. “I noticed that what’s important is not the single moment of selling a car, but what happens after the sale.”

Kim’s reputation rests on the growth of the imported car industry in Korea. BMW has been the best-selling foreign auto brand for five consecutive years, according to data from the Korea Automobile Importers and Distributors Association.

While 2013 was obviously a great year for BMW Korea in terms of business, Kim says it was an especially memorable year for him because it taught him the importance of communication.

Last year, Kim was summoned as a witness in a parliamentary hearing of the Fair Trade Commission regarding the imported car industry, along with other foreign brand CEOs.

The local lawmakers on the National Assembly’s National Policy Committee accused the industry of malpractices such as high repair costs and overly expensive sticker prices. Kim said this was a good experience for him to think about communication.

“We always emphasize the importance of communication with customers and the market, but the result of our efforts is not evaluated by me,” he said. “In the end, the fact that that hearing took place meant that our effort wasn’t good enough, and this made me refine our skills and widen our range of communications.”

Kim has been trying to strengthen communication with customers, adopting an ombudsman system for the first time in the industry in 2012 while starting an Invoice Hotline system, too, through which customers can file complaints about after-sales services online and get refunds when wrongdoings are discovered.

Kim said the company really focused on how its customer service program was working in the market last year.

But the lack of communication issue was not the only problem in the imported car industry in 2013. It was a year of political confrontation, from protest rallies on the streets to the recent strike by the railway union.

Kim believes a solution can be found in Germany, the country he has been attached to for the last 19 years due to his work for Munich-based BMW.

“Germany also has various groups showing their various interests sporadically, and I envy their process of discussion and change,” he said.

In Germany, people know they have their own beliefs, but acknowledge differences and try to narrow them by talking them out. But in Korea, people think everybody should be in the same pool, and then they accuse each other of standing on the wrong side, which makes talking more difficult from the start.

“Korea’s achievement in the last 30 years is exceptional, and overseas we often hear our country being described as ‘amazing Korea.’

But to go global and share the virtues of a world society we have to acknowledge difference in others and grow our skills to flexibly manage those differences.”

Kim sees this as the key to help Korea step up another level. He emphasized that the power of Germany comes from communication and meditation with its historical background of being the philosophical cradle of Europe.

The CEO believes that Korea will move on to be a better and more open society when the cultures of discussion and flexible thinking become common. Kim has set his own example in Korea, breaking the stereotype that a college education is required to prove a person’s skills. 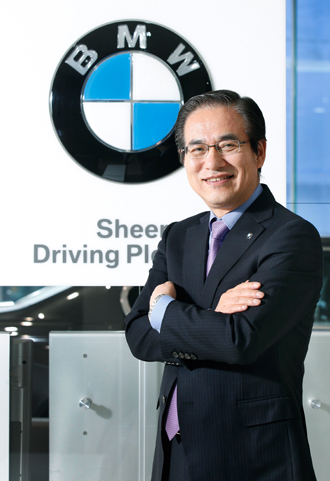 Kim was a high school graduate when he entered BMW, but he earned a college degree later.

“Whenever there is reshuffle season, I see newspaper headlines that some company got its first female executive or its first executive without a college education,” Kim said.

“But we know the focus should be on what kind of background or skills those promoted executives have. What we can also learn from Germany’s education system, which helps all kinds of students develop.”

Kim thinks the Park Geun-hye administration’s slogan of “creative economy” is in line with what Germany has been doing all along to earn a practical and efficient image. He believes the power of meditation will be the basis of rolling out creative ideas that can lead the future of the Korean economy.

The focus, however, should be on promoting SMEs, which is how Germany became a power player in the global economy.


“Germans also thought about manipulating the exchange rate to promote their economy, but what they concentrated on instead was to build their R&D ability and strengthen companies’ true competitiveness,” Kim said.

“The government will determine the proper currency rate to find a balance between promoting domestic demand and exports.

What’s important is to help SMEs go global with their technology because they are small enough to quickly adjust to changes. If the Korean economy in the next decades still depends on a small number of conglomerates, I don’t think that’s a good situation.”

The Duksoo Commercial High School graduate said the country’s policies should be more focused on start-ups, which enter the market with creative ideas.

The BMW Korea Future Fund, the first nonprofit social contribution organization by a foreign carmaker in Korea, is also strengthening programs to help start-ups, according to Kim.

“It’s socially very important to take children’s dreams and make them come true, but it will be very difficult if our social views and infrastructure is lacking,” Kim said.

“In some advanced countries, Harvard University graduates ask to work for social companies to spread their dreams, and I see that as an example of a healthy society.”

Kim said that BMW Group Korea will beef up its CSR activities through the BMW Korea Future Fund.

This year should be another milestone for BMW Group Korea since the BMW Group Driving Center in Incheon, the first in Asia and the third in the world after Germany and the United States, will be open to the public. Kim said the construction of the driving center is part of a long-term goal for the company.

“It’s not about how many cars you sell, but to establish a consumer-centered mechanism that previously was built around producer and seller,”

Kim said. “The process of creating cultural emotion, such as expressing yourself through your automobile and building an infrastructure for other industries is what we are looking for and what BMW is good at.”

There is another milestone BMW Group Korea is trying to mark this year: electric vehicles. The company is planning to release the small EV i3 in late April and i8 in September. The electric batteries for BMW’s i Series are supplied by Samsung SDI and Kim said that buying BMW EV cars is, in fact, a way of helping the local company.

The company also donated 30 EV chargers to strengthen the EV infrastructure on Jeju Island. Kim hinted that BMW Group Korea could operate an EV charging business in the near future.

However, Kim said that the task is difficult for the company to fulfil on its own. He insisted that the government and the public change their attitudes about the EV business for the sake of the planet.

“I have big expectations, but I also have a bit of concern because everybody is talking about the importance of environmentally friendly cars in Korea, but there is no core element here,” Kim said.

“Since we started the fire, I hope others will help spread that fire. Electric vehicles are something the company does with a sense of vocation.”

Kim said he doesn’t know what he will be doing in 10 years. But one thing is sure: he won’t enter politics.

“It was enough for me to visit the National Assembly as a witness in a hearing,” he laughs.