Ministry puts its companies on diets

Ministry puts its companies on diets 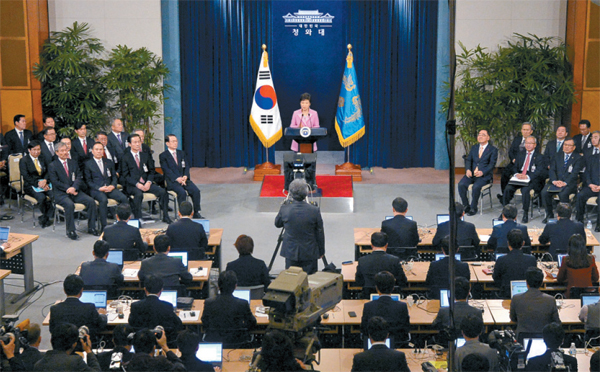 To follow President Park Geun-hye’s command to reform public sector companies, which she described in yesterday’s press conference, debt-ridden public institutions under the Ministry of Land, Infrastructure and Transport were told to cut costs by more than 10 percent and freeze wages until 2017.

Land Minister Suh Seoung-hwan made the order at Sejong government complex meeting yesterday, and 14 heads of institutions under the ministry, including the Korea Land and Housing Corporation and Korea Railroad Corporation, pledged to comply.

Suh, however, ordered the chiefs to revise the initial plans, saying, “They are responding only passively to the government’s order.”

“LH’s debt is rising 8 [trillion] to 9 trillion won [$7.5 billion to $8.4 billion] every year, but its plan will only cut about 15 billion won a year,” an official of the Land Ministry said.

The public housing provider was saddled with 141 trillion won of debt as of last June, up from 121 trillion won in 2010. Its debt-to-capital ratio has reached 467 percent.

“I want LH to get a real sense of urgency and take innovative measures to improve its fiscal state,” Suh said. “Without strong measures, LH can even go belly up.”

Korail is 14.3 trillion won in debt, and its debt-to-capital ratio is 242 percent. A debt ratio more than 200 percent is considered a serious situation.

According to the Ministry of Strategy and Finance, debt at public entities is growing at an alarming rate and presents a major burden on the national economy.

The total debt of Korea’s 295 public institutes, corporations and quasi-governmental organizations shot up from 290 trillion won in 2008 to 493 trillion won in 2012. “Korail will have to make even stronger efforts to reform its organization if it wants to improve its damaged public reputation after the longest ever labor strike [lasting 22 days], which caused significant inconvenience to the people,” Suh said. The Land Minister’s order to “freeze all institutions” can be interpreted as keeping them from expanding further.

“The institutions can either stop hiring or freeze wages of current employees,” the official said. “Each institute will have to choose on its own.”

Korean public companies are called “God’s workplaces” because of their benefits, high salaries and workplace complacency. Young job seekers spend more than a year on average preparing for annual examinations to enter such public companies.

The Korea Institute of Public Finance suggested late last year that the country should scale back infrastructure projects to reduce debt at public entities, many under the Ministry of Land, Infrastructure and Transport.

For the past five years, the institute found, about 132 trillion won in debt was incurred by the Lee Myung-bak administration’s public projects, including the four-rivers restoration project, the Seoul and Incheon canal and frequent road works.