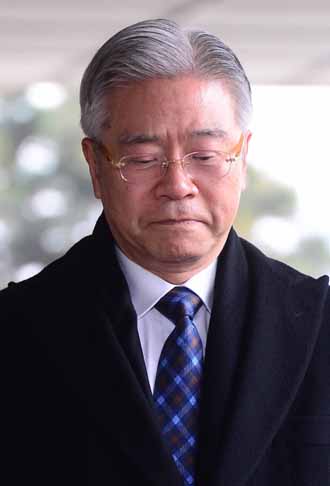 The prosecution accused Hyun of fraud, malpractice and embezzlement. He allegedly led the issuance of corporate bonds and commercial paper worth 1 trillion won ($935 million), knowing that the group would not be able to pay back its investors.

The warrants were requested because of the amount of damage done and because the three accomplices actively participated in the fraud. The review for the validity of the warrants is expected tomorrow.

The sales of corporate bonds and commercial paper caused massive financial losses for investors and Tongyang affiliates. The group affiliates filed for court receivership last year. Hyun and other executives had been notified about the risk of affiliates failing to repay the debts, but the group hid its liquidity shortage with fraudulent accounting and false disclosures.

The prosecution also suspects Tongyang Group falsely announced that it would sell Tongyang Networks to boost the sales of commercial paper. The prosecutors’ office raided the headquarters of Tongyang Group and some of its affiliates on Oct. 15 last year. Search and seizures also took place at the residences of Hyun and the former senior executives. The prosecutors also received tax investigation documents from the National Tax Service to look into the flow of funds.

In the aftermath of the incident, two workers from Tongyang Securities committed suicide. A 42-year-old woman at the company’s Jeju branch was found dead inside her car on Oct. 2, asphyxiated from burned charcoal briquettes. She left a suicide note denouncing Chairman Hyun for deceiving Tongyang’s clients.

Another employee at the Incheon branch also took his own life. His family said he was burdened by pressure after he was sued three times by individual investors. The prosecutors’ office said it plans to investigate further.