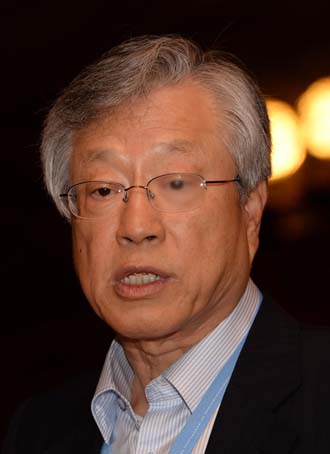 Lee has been investigated on charges of causing massive losses for the company by selling 39 offices at fire-sale prices and pushing poor investments in OIC Language Visual, a content firm, and Smart Mall, a subway advertising concept.

The prosecution also suspects Lee of causing financial damage by acquiring Cyber MBA, of which one of his relatives is a major shareholder.

He also allegedly embezzled KT funds by inflating bonuses paid to executives and using portions of them for lobbying.

Lee, who was the minister of information and communications in 1996, was named CEO of KT in 2009 during the Lee Myung-bak government. He was promoted to chairman just two months after starting work.

The total amount of damages he caused the company is expected to be more than 150 billion won, but prosecutors are only indicting him on charges that add up to about 20 billion won in damages.

Lee was the subject of criminal complaints by civic groups in February and October last year. The civic groups claimed he played favorites with unauthorized subcontractors.

The prosecutors’ office raided the offices and residences of top executives of KT last October. Lee stepped down in December as the prosecution began the probe.

Lee has been summoned four times from Dec. 19 to 27 and reportedly denied most of the accusations.

A review for the validity of the warrant is expected on Monday.