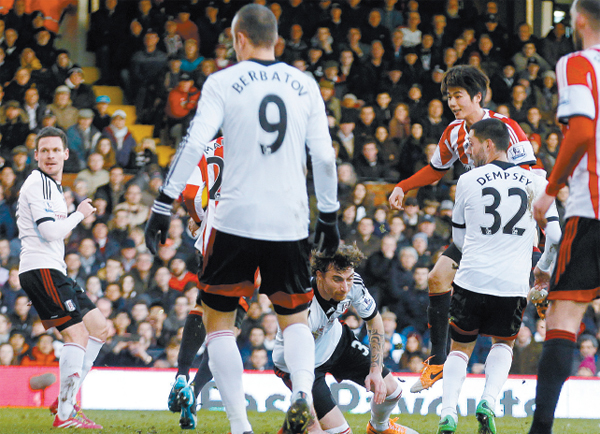 Ki Sung-yueng of Sunderland led the team’s 4-1 victory over Fulham with a goal and an assist on Saturday.

In the English Premier League’s 21st round match held at Craven Cottage, Ki scored the team’s second goal for a 2-0 lead in the 41st minute in a free-kick situation. He blasted a shot with his right foot into the opponent’s goal on a ball delivered by teammate Adam Johnson, who scored a hat trick in the match.

When the team was chased, 2-1, in the second half, Ki got an assist on Johnson’s second goal of the game in the 69th minute for a 3-1 lead.

Ki’s goal in the first half was Sunderland’s 7,000th goal in franchise history. And it was the first time Ki had a goal and an assist in a EPL game.

Under Manager Gus Poyet’s 4-5-1 formation, Ki was paired with Jack Colback as central midfielders and distributed passes to attackers. He sometimes tried to create scoring chances for himself with midrange shots outside the box.

“I think we got our confidence back, and we tried to show fans that we are trying to win,” Ki said. “I wanted to give a good result to fans who have traveled a long distance to support us.”

Sunderland can beat the odds and stay up despite being at the bottom of the Premier League at Christmas, Poyet said after the emphatic win at Fulham.

Being at the bottom of the league almost always leads to relegation, with only West Bromwich Albion making a great escape in 2005. But after Johnson’s hat trick on Saturday hoisted Sunderland off the bottom, Poyet said they are up for the fight.

“It was an outstanding performance,” the Uruguayan told the BBC. “If we can retain that level, then we can stay up. We needed something special and got it today.

“The lads were superb, you do not score four goals away from home many times in your life.

“Adam Johnson was exceptional with his passing, his creativity and everything he did today. He needs the ball and the chance to pass it,” Poyet said.

Johnson, signed in 2012 from Manchester City, has slipped from the limelight and is no longer talked about as an England player despite 11 caps for his country.

However, his performance Saturday, which included a 25-meter (82-foot) free kick and a penalty, was a reminder of why he was once one of the most sought-after young players in Britain.

“I’ve been working hard, and at the beginning of the year I said this was a new year, a new start and time to get back to how I had been playing in the past,” he said. “It was a massive win for us, and there will be a few people looking over their shoulders. Everyone said we were adrift, but we showed we could be a force.”

Sunderland has 17 points from 21 games and are ahead of bottom club Crystal Palace on goal difference. Cardiff City and West Ham United each has 18 points.

Meanwhile, Eden Hazard and Fernando Torres applied the gloss to a workmanlike 2-0 victory at Hull City on Saturday that lifted Chelsea ominously to the top of the Premier League.

In true Jose Mourinho style, the Londoners nullified the minimal threat posed by Hull, then cut through at will after the break when classy goals by Hazard and Torres earned the Blues a fourth consecutive league victory.

Mourinho’s in-form side have 46 points, one more than second-placed Arsenal, who visit Aston Villa on Monday, and two ahead of Manchester City, who travel to Newcastle United on Sunday. Champions Manchester United remained in seventh place, nine points behind Chelsea, but at least got back to its winning ways with a 2-0 home defeat of Swansea City that put a smile back on the face of Manager David Moyes after three consecutive defeats.