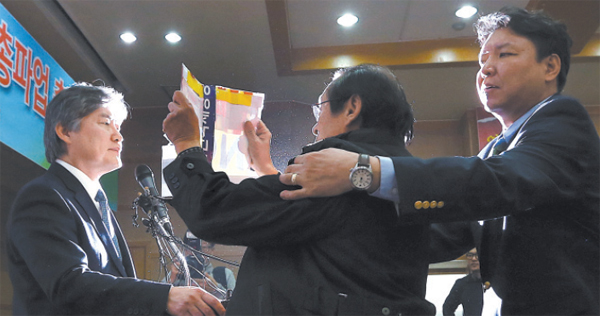 As Roh Hwan-kyu, left, president of the KMA, held a press conference yesterday, a man walked up to the podium to protest the doctors’ strike plan. [NEWSIS]

In a swift response to the Korean Medical Association’s call for a nationwide walkout on March 3, the government yesterday vowed to take stern action against the association, calling the potential strike “illegal” and “unacceptable.”

“An illegal strike that takes the health of the public as hostage is unacceptable under any circumstances and will not be supported by the public,” said Lee Young-chan, vice health and welfare minister, yesterday during a press briefing at the Sejong Government Complex, adding that the government would “sternly respond” to the strike “in accordance with the law.”

The tough reaction by the government came after the KMA, the 95,000-member lobbying group for physicians, declared yesterday it would hold a vote on whether to strike on March 3 in protest of the government’s plan to allow remote medical service via telecommunication devices and medical institutes to run for-profit subsidiaries at home and abroad.

The association of doctors regards setting up such subsidies is a step toward the establishment of for-profit hospitals, a charge the government denies.

The announcement on the strike came after a nine-hour rally with 550 participants on Saturday at the association’s headquarters in Yongsan District, central Seoul, which lasted until 2 a.m. yesterday.

“I would say members will vote yes to go ahead with the strike by a small margin,” said Roh Hwan-kyu, president of the KMA, during a press briefing yesterday at the association’s headquarters. “We have set March 3 for a strike date for two reasons: It provides enough time to have negotiations [to resolve the matter] and to properly prepare ourselves for the fight.”

Roh, however, did not specify when the association would vote.

The president said the physicians’ group is open to having talks with the government and could drop the scheduled walkout depending on the outcome of the talks.

Under the government’s deregulation plan, long-distance medical examinations over the Internet would be allowed to increase health care access for people living in remote areas, as well as seniors and disabled patients who cannot freely move around.

The government expects the service could save patients with chronic diseases like high blood pressure and diabetes from having to travel far.

The medical association opposes the remote-treatment proposal, claiming it will put the health of patients at risk because it is too difficult for doctors to assess their patients’ conditions accurately.

Proponents of the government plan say that long-distance examinations can be combined with in-person examinations as needed to ensure patient safety and the accuracy of diagnoses.

Critics of the medical association accuse the KMA of opposing the remote-treatment plan not because of accuracy but because medical clinics in rural areas are worried they could lose patients.

Lee said the establishment of medical subsidiaries would assist hospitals in increasing the number of foreign patients and going into the overseas medical markets, thereby creating jobs.

The government also expects that allowing such auxiliary subsidies will enhance the profitability of medical institutions, leading to improved medical service quality overall.

Under the medical deregulation plan, the government will require medical institutes to invest 80 percent of the profit generated from nonmedical services provided by subsidiaries into medical services to improve their quality.

The threat of a KMA walkout comes just one month after the 22-day strike by Korea Railroad Corporation’s union members, who led the longest rail strike in Korean history in protest of what they claimed was the government’s plan to privatize the rail industry.