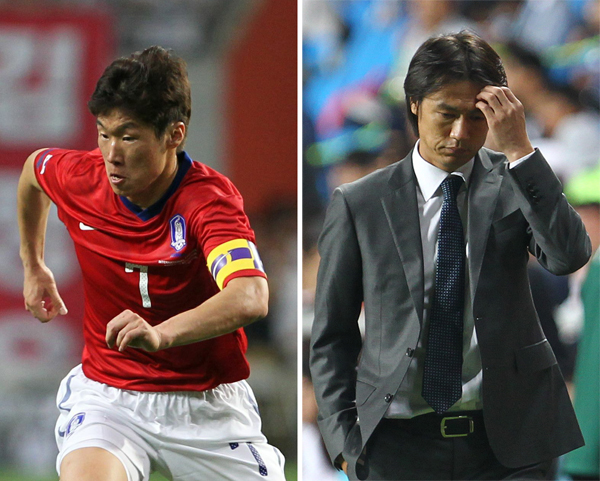 Last week, national team football coach Hong Myung-bo, 44, shocked the country when he said he will ask Park Ji-sung of PSV Eindhoven to consider joining the squad for the Brazil World Cup.

The 33-year-old midfielder, who retired from the team after finishing the 2011 AFC Asian Cup, has said consistently that he won’t return to the team because he wants to give younger players a chance to play, also adding that he plans to wrap up his career successfully in a competitive European league club.

It was surprising news for fans, but only a few people opposed Park’s retirement because what he has done for Korean football is well known. Since he debuted on the national team in 2000 for the AFC Asian Cup preliminary round match against Laos, Park has played in 123 A-matches, including 23 on the U-22 team, scoring 16 goals.

In the 2002 Korea-Japan World Cup, he became a rising star under coach Guus Hiddink by scoring the winning goal that eliminated Portugal from the first round. He also led the national team in the 2006 and 2010 World Cup events.

Park scored the game-tying goal against France in the group round match in 2006 and shot a goal against Greece in the 2010 event. Since becoming captain of the national team in 2008, Park has been there whenever the country has needed him.

However, Park sometimes paid a price for those sacrifices. Since he began playing on European league teams such as Eindhoven (2002-5 and 2013) and Manchester United (2005-12), one of the toughest things he has had to deal with has been managing the tight schedule between his club and the national team - and the long distance between their locations.

When Park had difficulty getting playing time, Korean fans got mad at United coach Alex Ferguson, but Ferguson used Park sparingly because he was worried about Park’s knee. Park recently said that 2007, the year he underwent his second surgery, was the scariest time in his career.

“Doctors told me my career would end if things went bad,” he told Korean media.

But Park never complained about his injury and never said he needed a break. He gladly accepted the call for A-matches and played for the national team. Koreans started calling the veteran midfielder “Captain Park” to praise his contributions to the country. When he announced his retirement from the national team in 2011, he said, “I want to have time to wrap up my career.”

Fans respected his wishes, as did former national team coaches Cho Kwang-rae and Choi Kang-hee. When the team played poorly in the Asia regional round matches for the Brazil World Cup, some said the coaches should bring Park back to the national team, but they chose not to. Both said: “Having Park in the lineup will be a huge plus, but everyone knows what Park already has done for the country. The best thing we can do is show that we can overcome hard tasks without him because his retirement is an issue that fans and Park himself have already accepted.”

But it looks like Hong is the only person who doesn’t respect Park. It is true that the national team is too young, as its best 11 consists of players such as Son Heung-min of Leverkusen, 21, Ki Sung-yueng of Sunderland, 25, and Lee Chung-yong of the Bolton Wanderers, also 25.

Arsenal striker Park Chu-young, 28, is a veteran who could lead the team, but Park hasn’t been called up by Hong as he hasn’t played a match in the English Premier League. Since taking over the team in July, Hong might have felt that his squad really needs some veterans.

But the national team, particularly the midfield and forward positions where Park could play, is already filled with the country’s top players, who are mostly playing in European leagues, including Lee of Bolton, Kim Bo-kyung of Cardiff City, Lee Keun-ho of Sangmu Phoenix, Son of Leverkusen and Koo Ja-cheol of Vfl Wolfsburg.

If Hong really needs a veteran, it would be better to find one among the ranks of defenders. The team’s four back defenders are Kim Young-kwon, 24, Hong Jung-ho, 24, Jang Hyun-soo, 23, Park Joo-ho, 27, and Lee Yong, 28. Hong needs to look carefully at the K-League’s veteran defenders, because the players who often made mistakes in the past were young defenders, not midfielders or forwards.

Veteran defender Kwak Tae-hwi, 34, who was sometimes included on Hong’s squad, needs to show up more often on the field like he did under Choi Kang-hee’s leadership. Kim Jin-kyu, 29, who played in the 2006 World Cup, and Hwang Jae-won, 33, are also good options.

The way Hong is dealing with this issue is wrong. He said that he will meet Park in March, but he also said he developed this plan when he became the national team coach in July. The question is why he spoke about such an important issue with the media before speaking to Park.

Hong said “I will not force Park to play for the team,” but it already looks like he is forcing Park to comply with his call through using the media. Fans and analysts who hadn’t even considered Park for the national team roster have started discussing the issue intensively.

Whenever the national team performed poorly in the past, fans on the Internet often brought up the possibility of Park’s return, but the excitement would quickly dissipate. However, since the team coach raised the issue, Park, who was preparing for a happy and quiet ending to his career, has become the biggest issue in Korean football.

Adding Park to the roster would be a huge plus for the team considering his leadership, skills and experience, but the timing, progress and the manner of bringing him back are totally wrong because he is now in a position in which he must repeat something he has already said publicly.

Some will understand the decision Park will make in March, but others who want Park to return will criticize him again.