Dimples in the golf ball a challenge for researcher

Dimples in the golf ball a challenge for researcher 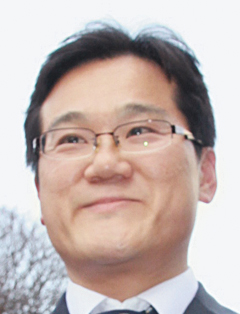 In the world of physics, predicting the trajectory and velocity of a dimpled golf ball is a difficult task, and in some cases it’s even more complex than determining that of an intercontinental ballistic missile or a rocket ship.

Although it’s been 44 years since mankind first landed on the moon, accurately and consistently predicting the flight principle of the golf ball, just 4.2 centimeters (1.65 inches) in diameter, has yet to be perfected.

But for Kim Hyoung-chol, a researcher at Dunlop Sport in Japan, this mystery is a motivating challenge, and the reason why he has devoted his life to studying the golf ball.

“It is more complex than the aerodynamics of airplane wings and since there are many aspects that need to be explained, I was eager to study [the golf ball],” said Kim, who was in Korea last week on vacation.

The 40-year-old has become one of the top researchers in the field, designing an array of dimpled golf balls and having been awarded 20 patents. For some professional golfers, Kim’s specialty golf balls are the equivalent of high-tech weaponry.

Kim explained that the dimples in the golf ball contribute to why predicting its path can be so difficult. Originally, golf balls were smooth but, during the 19th century, golfers began to notice that golf balls that had nicks or abrasions tended to travel farther.

Scientists eventually found that the nicks and cuts on the golf ball influenced the physical forces at play after the ball is hit, slowing its reduction in speed. However, so far no principle has been found to explain how a golf ball’s trajectory and velocity changes in regard to the depth, width and size of its dimples.

“Unlike airplanes or missiles that are streamlined and don’t rotate, the golf ball is spherical and rotates in flight, so it is difficult to determine that,” Kim said. “With accumulated experience, I found that the golf ball takes off easier if the dimples are shallower, but since I don’t [have an exact formula figured out], I always get the exact result only after I hit the ball.”

But although he is a golf ball expert, the doctor admits his golf skills are “terrible.”