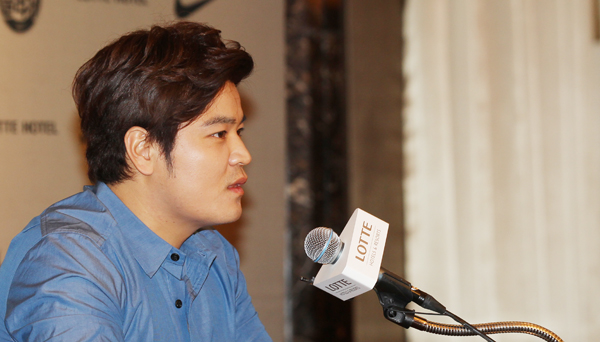 In the early 2000s, Choo Shin-soo was a promising baseball pitcher in Korea. His uncle was a star second baseman for the Lotte Giants, and Choo was one of the country’s best amateur left-handed starting pitchers. However, he suddenly left the country to go to the United States to pursue a career in Major League Baseball.

But life in the minor leagues was hard for the young player. He sometimes shared a small house with three or four couples to save money, and his wife once drove herself to the hospital to give birth to one of their children.

After a series of twists and turns over the course of 12 years, the 32-year-old signed a $130 million, seven-year deal with the Texas Rangers, the sixth-largest deal for an outfielder in MLB history. Ilgan Sports, an affiliate of the Korea JoongAng Daily, met with Choo earlier this month. Here are some excerpts from that interview:

Q. Did you get many calls after you signed your megadeal?

A. People who know me well say my hard efforts in baseball finally paid off. Because I received so much support from fans and people around me, I’m trying to pay them back in different ways.

No one seems to be jealous of your contract. Do you know why?

I think it is because many people know my history in the minor leagues. I think they are pleased to see someone realizing their dream after overcoming all of those hard years.

What kind of changes do you think you will make?

Before the contract, I was under pressure to be a good player because I always thought that I couldn’t take care of my family if I don’t play baseball well. My former manager, Dusty Baker, told me to try not to think about money anymore and try to enjoy baseball like when I was an amateur player. I will try to follow his advice, but I will not change my habits - like being a player who always arrives at the ballpark early in the morning for practice and works harder than anyone else.

Why are media outlets suddenly interested in your wife, Ha Won-mi?

She wasn’t able to speak English and she didn’t have a driver’s license, but she came all the way to the United States because of me. She had been taking care of my family for the last 12 years. When I went on away games for more than a week or two, she had to take care of our three children all by herself. She never told me that she had suffered from postpartum depression because she worried that it would distract me from playing baseball.

You are rich now. Have you given her a present?

Because her birthday is coming soon, I asked her if she wanted anything, but she said she doesn’t need anything.

She said, “We have our own house and a car, why don’t we just help some people in Korea?”

Tell us about your youth.

When I was a kid, I always tried to become like my uncle, Park Jung-tae. [Park is a former star second baseman who is now the coach of the Lotte Giants.] I dreamed of becoming a star player for the Giants like he was and one day, when I saw Park Chan-ho playing in Major League Baseball, I started dreaming of becoming a star major league player.

Your father [Choo So-min] is also famous for training you in a hard-core way.

Because he was also an athlete [boxing and track and field], he fostered me strongly. Every time I brought home a trophy for second or third place in an event, he just threw them out and told me that no one remembers who stands on the second- or third-place podium in sports.

Have you ever imagined yourself playing in Korea?

You were one of the best pitchers in Korean amateur baseball, but you became a hitter in the United States and you had to change your fielding position many times. Where will you play now?

I think I will play in left field with the Rangers. Because I just made a megadeal with the team, I can probably play where I want to play, but I have different ideas. First of all, I’m confident playing in any outfield position, but I am willing to play where my team needs me. I think my experience in center field with the Cincinnati Reds positively impacted my signing.

What do you want to accomplish in the rest of your career?

I really want to win the World Series. I probably am not going to be a Hall of Famer, but I will try to focus on doing the things that I am capable of [hitting over .300 with more than 20 home runs and 20 steals per season] and being the best Asian hitter. I have 104 home runs and 105 steals as of now, and my next goal is to accomplish the 200-200, so I can establish a better record than Suzuki Ichiro [111 home runs and 472 steals].

Your best friends [Lee Dae-ho of the SoftBank Hawks and Jung Keun-woo of the Hanwha Eagles] also signed huge contracts with their teams in the offseason. What do you think about that?

Before I congratulate them, I think I should apologize to fans because I can’t participate in the Incheon Asian Games. I hope to be able to serve the country with them in other events in the future, like the 2017 World Baseball Classic.