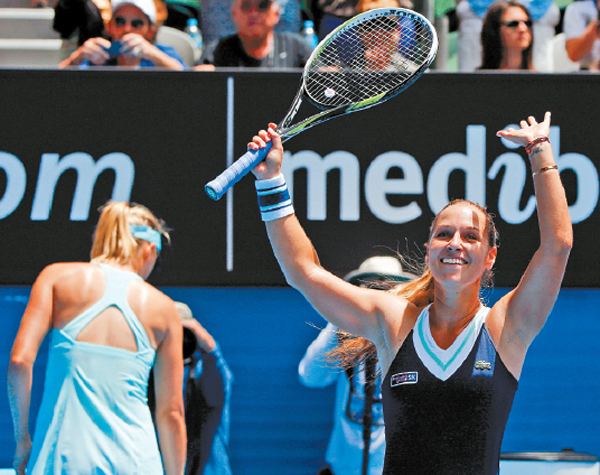 Azarenka had a 6-3, 6-2 win over No. 13-seeded Sloane Stephens in a match that didn’t have any of the drama of their contentious semifinal here last year.

The third-seeded Sharapova lost, 3-6, 6-4, 6-1 to Dominika Cibulkova in an earlier match at Rod Laver Arena, struggling with her serve in the second and third sets and making 45 unforced errors as she tried to claw her way back.

Her serve started to backfire from the eighth game, when she was broken at love while trying to serve out the first set.

During a run of four breaks against her, Sharapova won only three points on her own serve and fell 5-0 behind in the second set.

The four-time major winner rallied to win four straight games before Cibulkova held to level the match. After taking an off-court medical time-out after the second set for a hip strain, she was broken immediately and had seven double-faults in the third set.

Sharapova was two tournaments into a comeback from a prolonged layoff with a right shoulder injury, and said her run to the fourth round was a positive sign because she was healthy and back on tour.

“I have to look at the positives and see where I have come from in four or five months. I haven’t played a lot of tennis in those six months,’’ said Sharapova, who won the Australian title in 2008 and lost two other finals.

“So I certainly would have loved to play a little bit more before playing a Grand Slam, but this is the chance that I was given.’’

The top-ranked Williams, a five-time Australian Open champion, was knocked out in a three-set loss to 14th-seeded Ana Ivanovic on Sunday, and later revealed she had a back problem that had her considering withdrawing from the tournament.

Another former No. 1 was knocked out when No. 11 Simona Halep beat Jelena Jankovic, 6-4, 2-6, 6-0 to set up a quarterfinal against Cibulkova.

Sharapova may stick around in Melbourne to support her boyfriend, Grigor Dimitrov, who reached the quarterfinals for the first time with a 6-3, 3-6, 6-2, 6-4 win over Roberto Bautista-Agut. AP