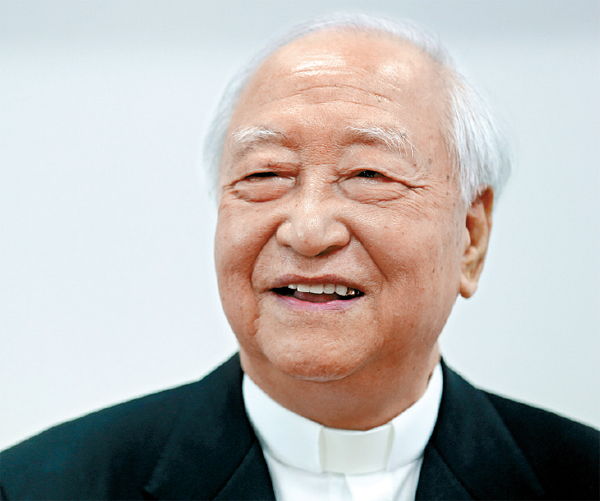 Why was he afraid? Because, Cheong said, he knew he was “insufficient” for the role. All he could do was pray for guidance and courage. But as the difficulties he faced were overcome one by one, Cheong said he believed God was guiding him.

“As I achieved certain results, I became more of God’s servant, not an arrogant person,” Cheong said in an interview with the JoongAng Ilbo on Jan. 14 at the Bishop Residence Hall in Hyehwa-dong, central Seoul. “My fears also have abated because I started to trust more in God.”

Cheong served as archbishop of the Seoul archdiocese from February 2006 to May 2012. Although he has retired, Cheong is still a cardinal because it is a lifetime appointment. Even though he is now well over 80, Cheong still maintains his usual routine, getting up at 5 a.m., writing or reading books, studying the Bible and meditating.

This interview was his first with the media since retiring. In it, Cheong was unusually expansive, worrying especially about conflicts in Korean society. The cardinal emphasized that dividing into warring left and right camps is “not God’s will.”

Q. Last year, we saw many conflicts and divisions in various areas. How did you interpret that?

A. I meet many different people, and they all live with good purposes. But then there is a conflict even if their foundation has goodness. That’s because greed is at the front. Our society’s conflicts come from the collision of desires, but people don’t recognize that such actions are selfish. They think their actions are good and just, but that’s an illusion of humankind. Lawmakers always say that they will put their best effort forward to develop our country, and I think they are sincere. But when they work in the National Assembly, it’s different because greed comes out. It’s greed that leads to conflicts.

Not only in politics but also in labor-management relationships and in families is there feuding. Where is it all coming from?

That is also because of greed and misunderstanding. Greed is a stereotype. When you abandon greediness, there are no stereotypes, and you can see the sincerity of others. That’s when you can understand other people.

People say they want to listen to “the voice of Jesus Christ” through their priests. But last year, some priests made controversial comments, criticizing the Park Geun-hye administration. What’s your opinion on that?

People who serve as intermediaries have done their jobs improperly, that’s why such things happened. In the Bible, people put Moses ahead because they were afraid to confront God directly. They asked Moses to talk with God and tell them what he heard. He was an intermediary. A prophet is a person who communicates with God. If a person doesn’t serve as an intermediary properly, that person is a false prophet.

Why is it so difficult to have communication and cooperation?

Because people all see issues within their own “prism,” and that curbs other people’s words. When people put down their prism, communication goes well. What’s a prism? That’s what we call selfishness.

When Jesus was on the cross, he prayed, saying “Father, forgive them for they know not what they do.” Does our society also need that kind of vision, in terms of forgiveness?

Pharisees had strong stereotypes and struck Jesus. Their background was kind but, because of stereotypes and greed, they misunderstood him. That’s why they didn’t realize what they had done. However, Jesus knew it and asked for their forgiveness.

Was that the leadership of Jesus?

The point of Jesus’s leadership is that he died. When Jesus was resurrected, many disciples believed that. What is death? It’s about putting away the greed that you could never let go. That is “death.”

After you are “dead,” what happens?

You will see many new things and leadership is created. If you hear a person has no selfishness, you know that means the leadership has been achieved.

“The CEO works for the company, not for himself,” is such example. If you believe this, leadership has the power and this is kind of leadership that our society needs. Abandon greed and leadership will live. Jesus did that and, through his death, he has shown it to us. Just put down your selfishness and you will profit before you talk.

What about Pope Francis? Some people say his leadership is the “leadership of the left,” while others say it’s the opposite.

Calling it left or right also comes from greediness. I think the pope is above that level. Although I can’t say he has no greed at all, what I feel is that he has transcended greed and that’s why he is a free man. From what I see, the pope is a free man.

What kind of freedom is that?

The truth will set you free. That’s “freedom.” In truth, there is no selfishness. If we give up our selfishness, we can become free.

From what I have felt, the pope is a free man who is already at a certain high level. I just feel that way. Some media call the pope strange because he is different from tradition, but I don’t think he is disobeying tradition. The pope is actually trying to show sincerely what is more important.

What do we have to know to be like that?

When there is selfishness, you will think “How will others judge me?” Then you will never act like the pope. The pope doesn’t care about the judgment of others.

You said conflict in society is not “God’s will.” Then what is God’s will?

Being a country where the poor and the rich share and live in harmony. God’s will is for humanity to live in happiness.

That those who work for the Korean people should abandon their selfishness, first of all. Nor should there be selfishness in people’s families. Then the country will develop and families will be happy. Conservative and progressives in our society should acknowledge each other and try to live together. The standard for coexistence should be how much they can contribute to increase the common good of our society.